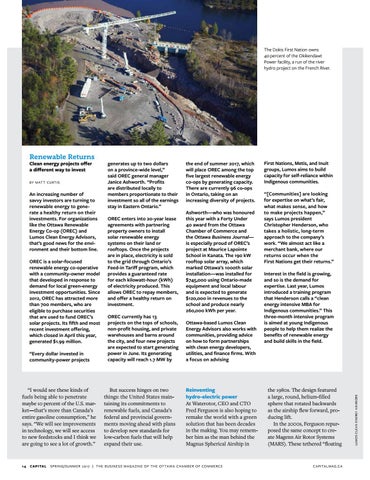 The Dokis First Nation owns 40 percent of the Okikendawt Power facility, a run of the river hydro project on the French River.

An increasing number of savvy investors are turning to renewable energy to generate a healthy return on their investments. For organizations like the Ottawa Renewable Energy Co-op (OREC) and Lumos Clean Energy Advisors, that’s good news for the environment and their bottom line. OREC is a solar-focused renewable energy co-operative with a community-owner model that developed in response to demand for local green-energy investment opportunities. Since 2012, OREC has attracted more than 700 members, who are eligible to purchase securities that are used to fund OREC’s solar projects. Its fifth and most recent investment offering, which closed in April this year, generated $1.99 million. “Every dollar invested in community-power projects

“I would see these kinds of fuels being able to penetrate maybe 10 percent of the U.S. market—that’s more than Canada’s entire gasoline consumption,” he says. “We will see improvements in technology, we will see access to new feedstocks and I think we are going to see a lot of growth.”

generates up to two dollars on a province-wide level,” said OREC general manager Janice Ashworth. “Profits are distributed locally to members proportionate to their investment so all of the earnings stay in Eastern Ontario.” OREC enters into 20-year lease agreements with partnering property owners to install solar renewable energy systems on their land or rooftops. Once the projects are in place, electricity is sold to the grid through Ontario’s Feed-in Tariff program, which provides a guaranteed rate for each kilowatt-hour (kWh) of electricity produced. This allows OREC to repay members, and offer a healthy return on investment. OREC currently has 13 projects on the tops of schools, non-profit housing, and private warehouses and barns around the city, and four new projects are expected to start generating power in June. Its generating capacity will reach 1.7 MW by

But success hinges on two things: the United States maintaining its commitments to renewable fuels, and Canada’s federal and provincial governments moving ahead with plans to develop new standards for low-carbon fuels that will help expand their use.

the end of summer 2017, which will place OREC among the top five largest renewable energy co-ops by generating capacity. There are currently 96 co-ops in Ontario, taking on an increasing diversity of projects. Ashworth—who was honoured this year with a Forty Under 40 award from the Ottawa Chamber of Commerce and the Ottawa Business Journal— is especially proud of OREC’s project at Maurice Lapointe School in Kanata. The 190 kW rooftop solar array, which marked Ottawa’s 1000th solar installation—was installed for $745,000 using Ontario-made equipment and local labour and is expected to generate $120,000 in revenues to the school and produce nearly 260,000 kWh per year. Ottawa-based Lumos Clean Energy Advisors also works with communities, providing advice on how to form partnerships with clean energy developers, utilities, and finance firms. With a focus on advising

Reinventing hydro-electric power At Waterotor, CEO and CTO Fred Ferguson is also hoping to remake the world with a green solution that has been decades in the making. You may remember him as the man behind the Magnus Spherical Airship in

First Nations, Metis, and Inuit groups, Lumos aims to build capacity for self-reliance within Indigenous communities. “[Communities] are looking for expertise on what’s fair, what makes sense, and how to make projects happen,” says Lumos president Christopher Henderson, who takes a holistic, long-term approach to the company’s work. “We almost act like a merchant bank, where our returns occur when the First Nations get their returns.” Interest in the field is growing, and so is the demand for expertise. Last year, Lumos introduced a training program that Henderson calls a “clean energy intensive MBA for Indigenous communities.” This three-month intensive program is aimed at young Indigenous people to help them realize the benefits of renewable energy and build skills in the field.

the 1980s. The design featured a large, round, helium-filled sphere that rotated backwards as the airship flew forward, producing lift. In the 2000s, Ferguson repurposed the same concept to create Magenn Air Rotor Systems (MARS). These tethered “floating