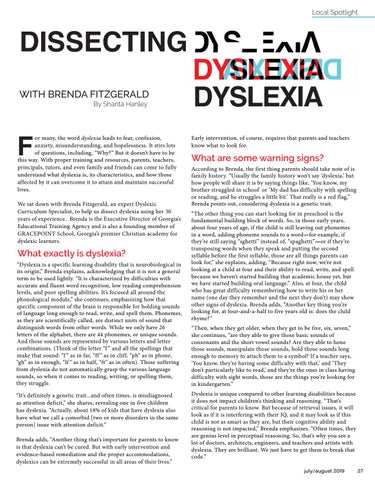 or many, the word dyslexia leads to fear, confusion, anxiety, misunderstanding, and hopelessness. It stirs lots of questions, including, “Why?” But it doesn’t have to be this way. With proper training and resources, parents, teachers, principals, tutors, and even family and friends can come to fully understand what dyslexia is, its characteristics, and how those affected by it can overcome it to attain and maintain successful lives. We sat down with Brenda Fitzgerald, an expert Dyslexic Curriculum Specialist, to help us dissect dyslexia using her 30 years of experience. Brenda is the Executive Director of Georgia’s Educational Training Agency and is also a founding member of GRACEPOINT School, Georgia’s premier Christian academy for dyslexic learners.

What exactly is dyslexia? “Dyslexia is a specific learning disability that is neurobiological in its origin,” Brenda explains, acknowledging that it is not a general term to be used lightly. “It is characterized by difficulties with accurate and fluent word recognition, low reading comprehension levels, and poor spelling abilities. It’s focused all around the phonological module,” she continues, emphasizing how that specific component of the brain is responsible for holding sounds of language long enough to read, write, and spell them. Phonemes, as they are scientifically called, are distinct units of sound that distinguish words from other words. While we only have 26 letters of the alphabet, there are 44 phonemes, or unique sounds. And those sounds are represented by various letters and letter combinations. (Think of the letter “f ” and all the spellings that make that sound: “f ” as in far, “ff ” as in cliff, “ph” as in phone, “gh” as in enough, “lf ” as in half, “ft” as in often). Those suffering from dyslexia do not automatically grasp the various language sounds, so when it comes to reading, writing, or spelling them, they struggle. “It’s definitely a genetic trait...and often times, is misdiagnosed as attention deficit,” she shares, revealing one in five children has dyslexia. “Actually, about 18% of kids that have dyslexia also have what we call a comorbid [two or more disorders in the same person] issue with attention deficit.” Brenda adds, “Another thing that’s important for parents to know is that dyslexia can’t be cured. But with early intervention and evidence-based remediation and the proper accommodations, dyslexics can be extremely successful in all areas of their lives.”

DYSLEXIA Early intervention, of course, requires that parents and teachers know what to look for.

What are some warning signs? According to Brenda, the first thing parents should take note of is family history. “Usually the family history won’t say ‘dyslexia,’ but how people will share it is by saying things like, ‘You know, my brother struggled in school’ or ‘My dad has difficulty with spelling or reading, and he struggles a little bit.’ That really is a red flag,” Brenda points out, considering dyslexia is a genetic trait. “The other thing you can start looking for in preschool is the fundamental building block of words. So, in those early years, about four years of age, if the child is still leaving out phonemes in a word, adding phoneme sounds to a word—for example, if they’re still saying “sghetti” instead of, “spaghetti”—or if they’re transposing words when they speak and putting the second syllable before the first syllable, those are all things parents can look for,” she explains, adding, “Because right now, we’re not looking at a child at four and their ability to read, write, and spell because we haven’t started building that academic house yet, but we have started building oral language.” Also, at four, the child who has great difficulty remembering how to write his or her name (one day they remember and the next they don’t) may show other signs of dyslexia. Brenda adds, “Another key thing you’re looking for, at four-and-a-half to five years old is: does the child rhyme?” “Then, when they get older, when they get to be five, six, seven,” she continues, “are they able to give those basic sounds of consonants and the short vowel sounds? Are they able to hone those sounds, manipulate those sounds, hold those sounds long enough to memory to attach them to a symbol? If a teacher says, ‘You know, they’re having some difficulty with that,’ and ‘They don’t particularly like to read,’ and they’re the ones in class having difficulty with sight words, those are the things you’re looking for in kindergarten.” Dyslexia is unique compared to other learning disabilities because it does not impact children’s thinking and reasoning. “That’s critical for parents to know. But because of retrieval issues, it will look as if it is interfering with their IQ, and it may look as if this child is not as smart as they are, but their cognitive ability and reasoning is not impacted,” Brenda emphasizes. “Often times, they are genius level in perceptual reasoning. So, that’s why you see a lot of doctors, architects, engineers, and teachers and artists with dyslexia. They are brilliant. We just have to get them to break that code.” july/august 2019

Featuring the Kendrick Brothers on this issue's cover, GOODlife Magazine is a premier bi-monthly Christian print and digital magazine. We capture readers with captivating articles, including regular interviews with prominent leaders and artists and topics such as family, business, travel, events, and so much more! 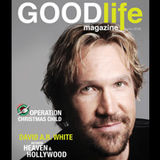