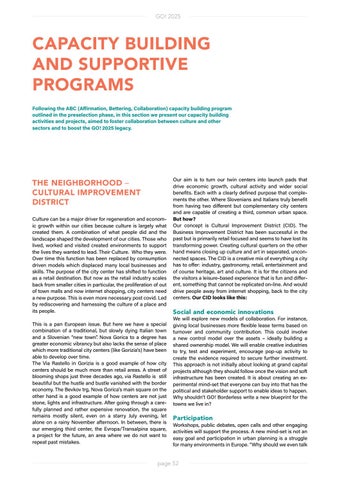 CAPACITY BUILDING AND SUPPORTIVE PROGRAMS Following the ABC (Affirmation, Bettering, Collaboration) capacity building program outlined in the preselection phase, in this section we present our capacity building activities and projects, aimed to foster collaboration between culture and other sectors and to boost the GO! 2025 legacy.

THE NEIGHBORHOOD – CULTURAL IMPROVEMENT DISTRICT Culture can be a major driver for regeneration and economic growth within our cities because culture is largely what created them. A combination of what people did and the landscape shaped the development of our cities. Those who lived, worked and visited created environments to support the lives they wanted to lead. Their Culture. Who they were. Over time this function has been replaced by consumption driven models which displaced many local businesses and skills. The purpose of the city center has shifted to function as a retail destination. But now as the retail industry scales back from smaller cities in particular, the proliferation of out of town malls and now internet shopping, city centers need a new purpose. This is even more necessary post covid. Led by rediscovering and harnessing the culture of a place and its people. This is a pan European issue. But here we have a special combination of a traditional, but slowly dying Italian town and a Slovenian “new town”. Nova Gorica to a degree has greater economic vibrancy but also lacks the sense of place which more traditional city centers (like Gorizia’s) have been able to develop over time. The Via Rastello in Gorizia is a good example of how city centers should be much more than retail areas. A street of blooming shops just three decades ago, via Rastello is still beautiful but the hustle and bustle vanished with the border economy. The Bevkov trg, Nova Gorica’s main square on the other hand is a good example of how centers are not just stone, lights and infrastructure. After going through a carefully planned and rather expensive renovation, the square remains mostly silent, even on a starry July evening, let alone on a rainy November afternoon. In between, there is our emerging third center, the Evropa/Transalpina square, a project for the future, an area where we do not want to repeat past mistakes.

Our aim is to turn our twin centers into launch pads that drive economic growth, cultural activity and wider social benefits. Each with a clearly defined purpose that complements the other. Where Slovenians and Italians truly benefit from having two different but complementary city centers and are capable of creating a third, common urban space. But how? Our concept is Cultural Improvement District (CID). The Business Improvement District has been successful in the past but is primarily retail focused and seems to have lost its transforming power. Creating cultural quarters on the other hand means closing up culture and art in separated, unconnected spaces. The CID is a creative mix of everything a city has to offer: industry, gastronomy, retail, entertainment and of course heritage, art and culture. It is for the citizens and the visitors a leisure-based experience that is fun and different, something that cannot be replicated on-line. And would drive people away from internet shopping, back to the city centers. Our CID looks like this:

We will explore new models of collaboration. For instance, giving local businesses more flexible lease terms based on turnover and community contribution. This could involve a new control model over the assets – ideally building a shared ownership model. We will enable creative industries to try, test and experiment, encourage pop-up activity to create the evidence required to secure further investment. This approach is not initially about looking at grand capital projects although they should follow once the vision and soft infrastructure has been created. It is about creating an experimental mind-set that everyone can buy into that has the political and stakeholder support to enable ideas to happen. Why shouldn’t GO! Borderless write a new blueprint for the towns we live in?

Workshops, public debates, open calls and other engaging activities will support the process. A new mind-set is not an easy goal and participation in urban planning is a struggle for many environments in Europe. “Why should we even talk 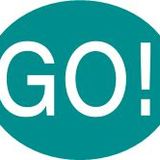