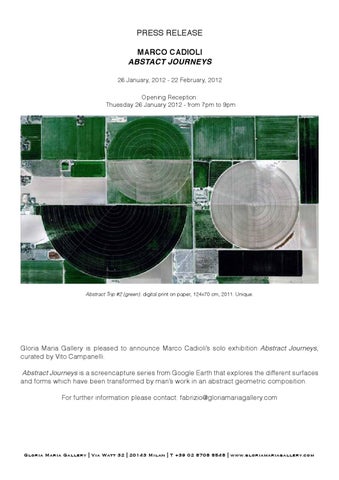 Gloria Maria Gallery is pleased to announce Marco Cadioli’s solo exhibition Abstract Journeys, curated by Vito Campanelli. Abstract Journeys is a screencapture series from Google Earth that explores the different surfaces and forms which have been transformed by man’s work in an abstract geometric composition. For further information please contact: fabrizio@gloriamariagallery.com

Vertigo of the Technological Sublime by Vito Campanelli

Abstract Journeys is the first solo exhibition of Marco Cadioli in his hometown Milan. After lots of wandering around the Net and the infinite galaxy of festivals and events that characterize the heterogeneous digital art scene, we are tempted to think that he finally came back home. Nothing more wrong, it isn’t in fact a landing but a further step, the nth of a travel which is the Milanese artist’s way of perceiving and knowing things. “You have to have approached a place from all four cardinal points if you want to take it in, and what’s more, you also have to have left it from all this points. [...] The same thing with houses. It is only after having crept along a series of them in search of a very specific one that you come to learn what they contain.”, Benjamin wrote so beautifully in Moscow Diary (1926-1927). These words represent the best possible introduction to the work of Cadioli, they help us understand the urgency that punctuates the rhythms of his daily practice, which is constantly striving towards the conquest of a new perspective. While enjoying the works on display it will be difficult to avoid the game of finding correspondences with great twentieth-century European abstract artists. Someone will find ‘traces’ of a Klee or a Kandinsky, others will emphasize the similarities with the construction of a Moholy -Nagy, or even imagine a link to Luigi Veronesi’s stills. An addictive game to which the same Cadioli felt passionate in his formal research, the basic idea of abstract journeys was to embark on a trip around the earth, armed with a prodigious technological magnifying glass (Google Earth) and a specific purpose: to find motifs related to European abstract painting, among the forms that human beings give to the earth’s surface with their incessant activity. Here he is, dwelling on landscapes that seem to come from a Bauhaus graphic workshop, and arriving - after a few mouse clicks - to compositions of natural and artificial elements that bring to mind the utopian models of El Lissitzky. The Russian artist had argued that the short-sighted see “only the machine” in the works of constructivism, on the contrary such artistic experiences show us that it is impossible to establish a certain boundary between mathematics and art, or between a work of art and a technology found (El Lissitzky and Hans Arp, Die Kunstismen, 1925). This consideration leads us beyond the mere aesthetic affinity between Cadioli’s most recent artistic production and abstractionism, offering us the opportunity to tighten the focus to its more significant contact point, that is the relationship between expression patterns and mathematical formulas. What we perceive in the abstract journeys are shapes and colours but, beyond this surface, an invisible web of numerical sequences that represent the real architecture of the artworks - just as happened in Vantongerloo that materialized and gave shape to mathematical formulas in his creations. The De Stijl Belgian artist is one of the first who has investigated the issues of mathematical relationship’s visual translation and the formalization of combinatorial processes; in Cadioli’s work the continuous transcoding visualabstraction mathematics-visual is totally implicit, it is in fact nothing but the so-called principle of “numerical representation”. As Manovich points out, this is the principle behind the present civilization of the computer and - in hindsight - the description of an image or a shape through a mathematical function, which is constantly happening behind the “phantasmagorie” that take life on billions of screens worldwide. According to the Russian origin theoretician “when new media come to life on computers, they come in numerical form, but it also happens that many new media are reconverted from old media” (The Language of New Media, 2001). In Cadioli’s work it is not possible to draw a sharp line between the media objects that arise in numerical form, and those that are “reconverted” from analogical media. In the creative process that gives rise to the abstracts journeys we are witnessing a dizzying jump from one medium to another. Gloria Maria Gallery | Via Watt 32 | 20143 Milan | T +39 02 8708 8548 | www.gloriamariagallery.com

Let’s try to reconstruct these steps: some humans alter through their activities (here it is mostly industrial-scale agricultural activities) the natural landscape, shaping it to reminiscent pictorial motifs that are characteristic of the twentieth century European abstract art; pictures of these landscapes are captured from satellites orbiting around the earth; other human beings (immaterial workers, perhaps Google employees) transform the photographs in a texture that is a sort of skin to be applied on the ‘body’ of two-dimensional and three-dimensional models that represent our planet; the so obtained virtual models become navigable through Google Earth, the popular program that allows us to fly across the world as we were on a romantic balloon; here Cadioli begins his own trips and formal research, in the above explained sense of search for evocative forms of motifs that are related to abstract painting. There is obviously no aesthetic intention in the practical activities through which human beings, with the help of machines, are changing the landscape - it is the artist that, looking from an impossible perspective (the eye of the satellite, in fact), reads on the territory signs that he interprets as pictorial motifs. At each significant finding the Milanese artist takes photographs, in other junctures he prefers to let the digital data stream continue to flow and therefore he realizes videos of the landscapes he encounters during his wanderings. The photographs close down the circle by returning to a reality of matter and tangible surfaces. As it is to guess, this incessant passing from one medium to another leaves, at each step, valuable heritage, an additional layer that, in addition to others, makes the works of Cadioli assume consistency across the stratification of language and media technologies, metaphors and shared conventions, grammars and specialized procedures, forms and meanings constantly centrifuged in social processes. We are facing those loans from one medium to another, which McLuhan refers to in Understanding Media (1964), when he writes that “the content of a medium is always another medium.” This intuition has been more recently investigated, in reference to digital media, by Bolter and Grusin, who both interpreted the representation of one medium into another as a “remediation” or as a mode through which the new digital media “take into loan, pay tribute or enter into competition with their predecessors “(Remediation, 1999). These dynamics are implemented in Cadioli’s abstracts journeys, where painting, the twentieth century painting motifs that the artist reads in the landscape, is remedied - whether intentionally or not - through agricultural technology, traditional photography, texture mapping, three-dimensional graphics, digital photography and video, editing software and, dulcis in fundo, the press. Cadioli, who is deeply aware of every implication of his gesture, has fun using Google Earth as a brush through which he reproduces expressive patterns of the past century on his screen. He plays to shape the earth and, turning into a demiurge, he doesn’t show being a victim of the “Promethean shame” that plagued modern individuals towards their own mechanic creations. The illusions of ordering the universe, according to someone’s own taste, offered by contemporary technology, are surely such as to induce the “unknown vertigo of technological sublime” described by Mario Costa, so this is a “tamed sublime” that - as such - can open up to a “socialized and controlled” use (The technological sublime, 1990). No more terror caused by natural events and untamed powers, but a “dread technology” which is defused in its most terrifying aspects, thanks to the aesthetics of communication. Cadioli, moreover, does not even make the mistake of thinking that technology is bent to human wishes and purposes, he rather considers – as in Flusser - photography as a creeping in the middle of the tool (“apparatus” in flusserian terminology) in order to discover its secrets, connecting to the photographic medium, mingling with it and experiencing a situation in which it is no longer possible to tell what among the human and the machine is the variable and what is the constant.

The photographic medium is not a tool (or machine) to change external reality, it is instead a playful device that fascinates the photographer in a game where all moves can never be exhausted. The endless game frees Cadioli from any ambition to dominate the tool, as well as from any fear of losing. He continues his ‘playful wandering’ on the Net giving us sublime technological vertigo, visions through which we are free to perceive what we want: pictorial abstract motifs, representations of mathematical algorithms or natural landscapes altered by the intervention of ‘human beings’. December, 2011