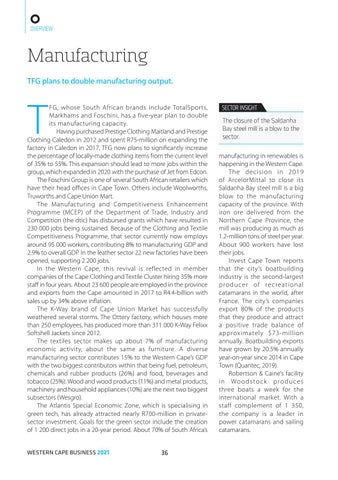 FG, whose South African brands include TotalSports, Markhams and Foschini, has a five-year plan to double its manufacturing capacity. Having purchased Prestige Clothing Maitland and Prestige Clothing Caledon in 2012 and spent R75-million on expanding the factory in Caledon in 2017, TFG now plans to significantly increase the percentage of locally-made clothing items from the current level of 35% to 55%. This expansion should lead to more jobs within the group, which expanded in 2020 with the purchase of Jet from Edcon. The Foschini Group is one of several South African retailers which have their head offices in Cape Town. Others include Woolworths, Truworths and Cape Union Mart. The Manufacturing and Competitiveness Enhancement Programme (MCEP) of the Department of Trade, Industry and Competition (the dtic) has disbursed grants which have resulted in 230 000 jobs being sustained. Because of the Clothing and Textile Competitiveness Programme, that sector currently now employs around 95 000 workers, contributing 8% to manufacturing GDP and 2.9% to overall GDP. In the leather sector 22 new factories have been opened, supporting 2 200 jobs. In the Western Cape, this revival is reflected in member companies of the Cape Clothing and Textile Cluster hiring 35% more staff in four years. About 23 600 people are employed in the province and exports from the Cape amounted in 2017 to R4.4-billion with sales up by 34% above inflation. The K-Way brand of Cape Union Market has successfully weathered several storms. The Ottery factory, which houses more than 250 employees, has produced more than 311 000 K-Way Felixx Softshell Jackets since 2012. The textiles sector makes up about 7% of manufacturing economic activity, about the same as furniture. A diverse manufacturing sector contributes 15% to the Western Cape’s GDP with the two biggest contributors within that being fuel, petroleum, chemicals and rubber products (26%) and food, beverages and tobacco (25%). Wood and wood products (11%) and metal products, machinery and household appliances (10%) are the next two biggest subsectors (Wesgro). The Atlantis Special Economic Zone, which is specialising in green tech, has already attracted nearly R700-million in privatesector investment. Goals for the green sector include the creation of 1 200 direct jobs in a 20-year period. About 70% of South Africa’s WESTERN CAPE BUSINESS 2021

SECTOR INSIGHT The closure of the Saldanha Bay steel mill is a blow to the sector. manufacturing in renewables is happening in the Western Cape. The decision in 2019 of ArcelorMittal to close its Saldanha Bay steel mill is a big blow to the manufacturing capacity of the province. With iron ore delivered from the Northern Cape Province, the mill was producing as much as 1.2-million tons of steel per year. About 900 workers have lost their jobs. Invest Cape Town reports that the city’s boatbuilding industry is the second-largest producer of recreational catamarans in the world, after France. The city’s companies export 80% of the products that they produce and attract a positive trade balance of approximately $73-million annually. Boatbuilding exports have grown by 20.5% annually year-on-year since 2014 in Cape Town (Quantec, 2019). Robertson & Caine’s facility i n Wo o d s t o c k p r o d u c e s three boats a week for the international market. With a staff complement of 1 350, the company is a leader in power catamarans and sailing catamarans.