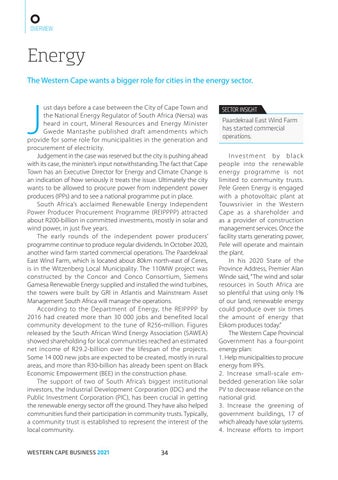 Energy The Western Cape wants a bigger role for cities in the energy sector.

ust days before a case between the City of Cape Town and the National Energy Regulator of South Africa (Nersa) was heard in court, Mineral Resources and Energy Minister Gwede Mantashe published draft amendments which provide for some role for municipalities in the generation and procurement of electricity. Judgement in the case was reserved but the city is pushing ahead with its case, the minister’s input notwithstanding. The fact that Cape Town has an Executive Director for Energy and Climate Change is an indication of how seriously it treats the issue. Ultimately the city wants to be allowed to procure power from independent power producers (IPPs) and to see a national programme put in place. South Africa’s acclaimed Renewable Energy Independent Power Producer Procurement Programme (REIPPPP) attracted about R200-billion in committed investments, mostly in solar and wind power, in just five years. The early rounds of the independent power producers’ programme continue to produce regular dividends. In October 2020, another wind farm started commercial operations. The Paardekraal East Wind Farm, which is located about 80km north-east of Ceres, is in the Witzenberg Local Municipality. The 110MW project was constructed by the Concor and Conco Consortium, Siemens Gamesa Renewable Energy supplied and installed the wind turbines, the towers were built by GRI in Atlantis and Mainstream Asset Management South Africa will manage the operations. According to the Department of Energy, the REIPPPP by 2016 had created more than 30 000 jobs and benefited local community development to the tune of R256-million. Figures released by the South African Wind Energy Association (SAWEA) showed shareholding for local communities reached an estimated net income of R29.2-billion over the lifespan of the projects. Some 14 000 new jobs are expected to be created, mostly in rural areas, and more than R30-billion has already been spent on Black Economic Empowerment (BEE) in the construction phase. The support of two of South Africa’s biggest institutional investors, the Industrial Development Corporation (IDC) and the Public Investment Corporation (PIC), has been crucial in getting the renewable energy sector off the ground. They have also helped communities fund their participation in community trusts. Typically, a community trust is established to represent the interest of the local community.

SECTOR INSIGHT Paardekraal East Wind Farm has started commercial operations. Investment by black people into the renewable energy programme is not limited to community trusts. Pele Green Energy is engaged with a photovoltaic plant at Touwsrivier in the Western Cape as a shareholder and as a provider of construction management services. Once the facility starts generating power, Pele will operate and maintain the plant. In his 2020 State of the Province Address, Premier Alan Winde said, “The wind and solar resources in South Africa are so plentiful that using only 1% of our land, renewable energy could produce over six times the amount of energy that Eskom produces today.” The Western Cape Provincial Government has a four-point energy plan: 1. Help municipalities to procure energy from IPPs. 2. Increase small-scale embedded generation like solar PV to decrease reliance on the national grid. 3. Increase the greening of government buildings, 17 of which already have solar systems. 4. Increase efforts to import