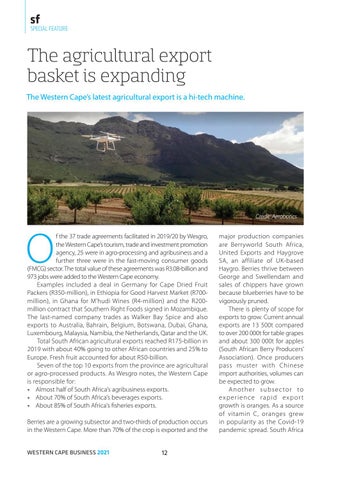 f the 37 trade agreements facilitated in 2019/20 by Wesgro, the Western Cape’s tourism, trade and investment promotion agency, 25 were in agro-processing and agribusiness and a further three were in the fast-moving consumer goods (FMCG) sector. The total value of these agreements was R3.08-billion and 973 jobs were added to the Western Cape economy. Examples included a deal in Germany for Cape Dried Fruit Packers (R350-million), in Ethiopia for Good Harvest Market (R700million), in Ghana for M’hudi Wines (R4-million) and the R200million contract that Southern Right Foods signed in Mozambique. The last-named company trades as Walker Bay Spice and also exports to Australia, Bahrain, Belgium, Botswana, Dubai, Ghana, Luxembourg, Malaysia, Namibia, the Netherlands, Qatar and the UK. Total South African agricultural exports reached R175-billion in 2019 with about 40% going to other African countries and 25% to Europe. Fresh fruit accounted for about R50-billion. Seven of the top 10 exports from the province are agricultural or agro-processed products. As Wesgro notes, the Western Cape is responsible for: • Almost half of South Africa’s agribusiness exports. • About 70% of South Africa’s beverages exports. • About 85% of South Africa’s fisheries exports. Berries are a growing subsector and two-thirds of production occurs in the Western Cape. More than 70% of the crop is exported and the

major production companies are Berryworld South Africa, United Exports and Haygrove SA, an affiliate of UK-based Haygro. Berries thrive between George and Swellendam and sales of chippers have grown because blueberries have to be vigorously pruned. There is plenty of scope for exports to grow. Current annual exports are 13 500t compared to over 200 000t for table grapes and about 300 000t for apples (South African Berry Producers’ Association). Once producers pass muster with Chinese import authorities, volumes can be expected to grow. A n o t h e r s u b s e c to r to experience rapid export growth is oranges. As a source of vitamin C, oranges grew in popularity as the Covid-19 pandemic spread. South Africa