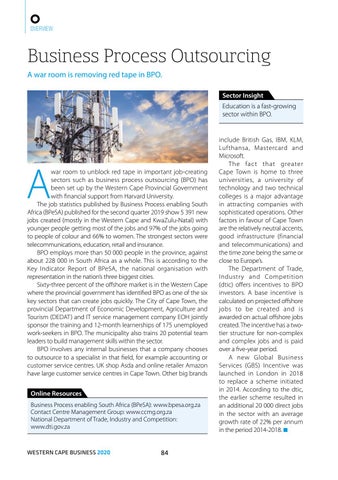 war room to unblock red tape in important job-creating sectors such as business process outsourcing (BPO) has been set up by the Western Cape Provincial Government with financial support from Harvard University. The job statistics published by Business Process enabling South Africa (BPeSA) published for the second quarter 2019 show 5 391 new jobs created (mostly in the Western Cape and KwaZulu-Natal) with younger people getting most of the jobs and 97% of the jobs going to people of colour and 66% to women. The strongest sectors were telecommunications, education, retail and insurance. BPO employs more than 50 000 people in the province, against about 228 000 in South Africa as a whole. This is according to the Key Indicator Report of BPeSA, the national organisation with representation in the nation’s three biggest cities. Sixty-three percent of the offshore market is in the Western Cape where the provincial government has identified BPO as one of the six key sectors that can create jobs quickly. The City of Cape Town, the provincial Department of Economic Development, Agriculture and Tourism (DEDAT) and IT service management company EOH jointly sponsor the training and 12-month learnerships of 175 unemployed work-seekers in BPO. The municipality also trains 20 potential team leaders to build management skills within the sector. BPO involves any internal businesses that a company chooses to outsource to a specialist in that field, for example accounting or customer service centres. UK shop Asda and online retailer Amazon have large customer service centres in Cape Town. Other big brands

include British Gas, IBM, KLM, Lufthansa, Mastercard and Microsoft. The fact that greater Cape Town is home to three universities, a university of technology and two technical colleges is a major advantage in attracting companies with sophisticated operations. Other factors in favour of Cape Town are the relatively neutral accents, good infrastructure (financial and telecommunications) and the time zone being the same or close to Europe’s. The Department of Trade, Industry and Competition (dtic) offers incentives to BPO investors. A base incentive is calculated on projected offshore jobs to be created and is awarded on actual offshore jobs created. The incentive has a twotier structure for non-complex and complex jobs and is paid over a five-year period. A new Global Business Services (GBS) Incentive was launched in London in 2018 to replace a scheme initiated in 2014. According to the dtic, the earlier scheme resulted in an additional 20 000 direct jobs in the sector with an average growth rate of 22% per annum in the period 2014-2018. ■