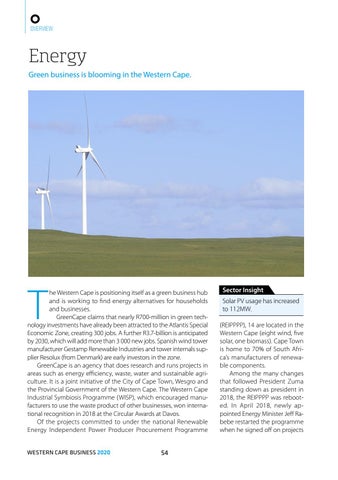 Energy Green business is blooming in the Western Cape.

he Western Cape is positioning itself as a green business hub and is working to find energy alternatives for households and businesses. GreenCape claims that nearly R700-million in green technology investments have already been attracted to the Atlantis Special Economic Zone, creating 300 jobs. A further R3.7-billion is anticipated by 2030, which will add more than 3 000 new jobs. Spanish wind tower manufacturer Gestamp Renewable Industries and tower internals supplier Resolux (from Denmark) are early investors in the zone. GreenCape is an agency that does research and runs projects in areas such as energy efficiency, waste, water and sustainable agriculture. It is a joint initiative of the City of Cape Town, Wesgro and the Provincial Government of the Western Cape. The Western Cape Industrial Symbiosis Programme (WISP), which encouraged manufacturers to use the waste product of other businesses, won international recognition in 2018 at the Circular Awards at Davos. Of the projects committed to under the national Renewable Energy Independent Power Producer Procurement Programme WESTERN CAPE BUSINESS 2020

Sector Insight Solar PV usage has increased to 112MW. (REIPPPP), 14 are located in the Western Cape (eight wind, five solar, one biomass). Cape Town is home to 70% of South Africaâ&#x20AC;&#x2122;s manufacturers of renewable components. Among the many changes that followed President Zuma standing down as president in 2018, the REIPPPP was rebooted. In April 2018, newly appointed Energy Minister Jeff Rabebe restarted the programme when he signed off on projects