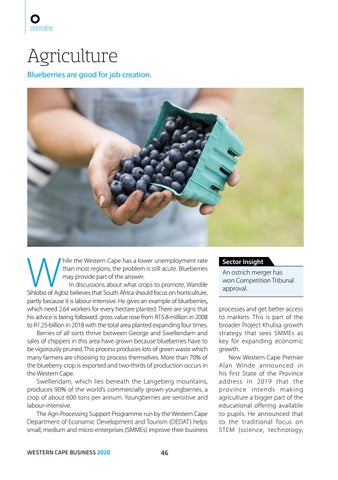 hile the Western Cape has a lower unemployment rate than most regions, the problem is still acute. Blueberries may provide part of the answer. â&#x20AC;&#x192; In discussions about what crops to promote, Wandile Sihlobo of Agbiz believes that South Africa should focus on horticulture, partly because it is labour-intensive. He gives an example of blueberries, which need 2.64 workers for every hectare planted. There are signs that his advice is being followed: gross value rose from R15.8-million in 2008 to R1.25-billion in 2018 with the total area planted expanding four times. Berries of all sorts thrive between George and Swellendam and sales of chippers in this area have grown because blueberries have to be vigorously pruned. This process produces lots of green waste which many farmers are choosing to process themselves. More than 70% of the blueberry crop is exported and two-thirds of production occurs in the Western Cape. Swellendam, which lies beneath the Langeberg mountains, produces 90% of the worldâ&#x20AC;&#x2122;s commercially grown youngberries, a crop of about 600 tons per annum. Youngberries are sensitive and labour-intensive. The Agri-Processing Support Programme run by the Western Cape Department of Economic Development and Tourism (DEDAT) helps small, medium and micro enterprises (SMMEs) improve their business WESTERN CAPE BUSINESS 2020

Sector Insight An ostrich merger has won Competition Tribunal approval. processes and get better access to markets. This is part of the broader Project Khulisa growth strategy that sees SMMEs as key for expanding economic growth. New Western Cape Premier Alan Winde announced in his first State of the Province address in 2019 that the province intends mak ing agriculture a bigger part of the educational offering available to pupils. He announced that to the traditional focus on STEM (science, technology,