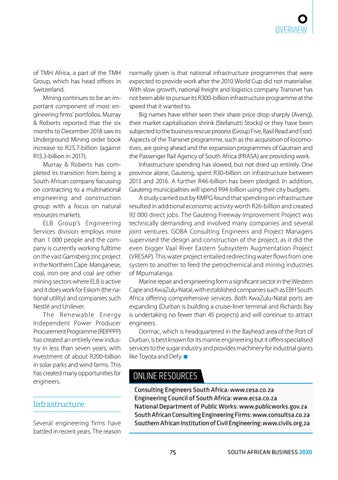 of TMH Africa, a part of the TMH Group, which has head offices in Switzerland. Mining continues to be an important component of most engineering firms’ portfolios. Murray & Roberts reported that the six months to December 2018 saw its Underground Mining order book increase to R25.7-billion (against R15.3-billion in 2017). Murray & Roberts has completed its transition from being a South African company focussing on contracting to a multinational engineering and construction group with a focus on natural resources markets. ELB Group’s Engineering Services division employs more than 1 000 people and the company is currently working fulltime on the vast Gamsberg zinc project in the Northern Cape. Manganese, coal, iron ore and coal are other mining sectors where ELB is active and it does work for Eskom (the national utility) and companies such Nestlé and Unilever. T he Renewable Energy Independent Power Producer Procurement Programme (REIPPPP) has created an entirely new industry in less than seven years, with investment of about R200-billion in solar parks and wind farms. This has created many opportunities for engineers.

normally given is that national infrastructure programmes that were expected to provide work after the 2010 World Cup did not materialise. With slow growth, national freight and logistics company Transnet has not been able to pursue its R300-billion infrastructure programme at the speed that it wanted to. Big names have either seen their share price drop sharply (Aveng), their market capitalisation shrink (Stefanutti Stocks) or they have been subjected to the business rescue process (Group Five, Basil Read and Esor). Aspects of the Transnet programme, such as the acquisition of locomotives, are going ahead and the expansion programmes of Gautrain and the Passenger Rail Agency of South Africa (PRASA) are providing work. Infrastructure spending has slowed, but not dried up entirely. One province alone, Gauteng, spent R30-billion on infrastructure between 2013 and 2016. A further R46-billion has been pledged. In addition, Gauteng municipalities will spend R94-billion using their city budgets. A study carried out by KMPG found that spending on infrastructure resulted in additional economic activity worth R26-billion and created 92 000 direct jobs. The Gauteng Freeway Improvement Project was technically demanding and involved many companies and several joint ventures. GOBA Consulting Engineers and Project Managers supervised the design and construction of the project, as it did the even bigger Vaal River Eastern Subsystem Augmentation Project (VRESAP). This water project entailed redirecting water flows from one system to another to feed the petrochemical and mining industries of Mpumalanga. Marine repair and engineering form a significant sector in the Western Cape and KwaZulu-Natal, with established companies such as EBH South Africa offering comprehensive services. Both KwaZulu-Natal ports are expanding (Durban is building a cruise-liner terminal and Richards Bay is undertaking no fewer than 45 projects) and will continue to attract engineers. Dormac, which is headquartered in the Bayhead area of the Port of Durban, is best known for its marine engineering but it offers specialised services to the sugar industry and provides machinery for industrial giants like Toyota and Defy.