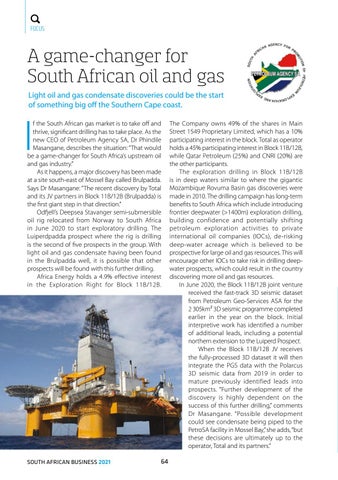 A game-changer for South African oil and gas Light oil and gas condensate discoveries could be the start of something big off the Southern Cape coast.

f the South African gas market is to take off and thrive, significant drilling has to take place. As the new CEO of Petroleum Agency SA, Dr Phindile Masangane, describes the situation: “That would be a game-changer for South Africa’s upstream oil and gas industry.” As it happens, a major discovery has been made at a site south-east of Mossel Bay called Brulpadda. Says Dr Masangane: “The recent discovery by Total and its JV partners in Block 11B/12B (Brulpadda) is the first giant step in that direction.” Odfjell’s Deepsea Stavanger semi-submersible oil rig relocated from Norway to South Africa in June 2020 to start exploratory drilling. The Luiperdpadda prospect where the rig is drilling is the second of five prospects in the group. With light oil and gas condensate having been found in the Brulpadda well, it is possible that other prospects will be found with this further drilling. Africa Energy holds a 4.9% effective interest in the Exploration Right for Block 11B/12B.

The Company owns 49% of the shares in Main Street 1549 Proprietary Limited, which has a 10% participating interest in the block. Total as operator holds a 45% participating interest in Block 11B/12B, while Qatar Petroleum (25%) and CNRI (20%) are the other participants. The exploration drilling in Block 11B/12B is in deep waters similar to where the gigantic Mozambique Rovuma Basin gas discoveries were made in 2010. The drilling campaign has long-term benefits to South Africa which include introducing frontier deepwater (>1400m) exploration drilling, building confidence and potentially shifting petroleum exploration activities to private international oil companies (IOCs), de-risking deep-water acreage which is believed to be prospective for large oil and gas resources. This will encourage other IOCs to take risk in drilling deepwater prospects, which could result in the country discovering more oil and gas resources. In June 2020, the Block 11B/12B joint venture received the fast-track 3D seismic dataset from Petroleum Geo-Services ASA for the 2 305km² 3D seismic programme completed earlier in the year on the block. Initial interpretive work has identified a number of additional leads, including a potential northern extension to the Luiperd Prospect. When the Block 11B/12B JV receives the fully-processed 3D dataset it will then integrate the PGS data with the Polarcus 3D seismic data from 2019 in order to mature previously identified leads into prospects. “Further development of the discovery is highly dependent on the success of this further drilling,” comments Dr Masangane. “Possible development could see condensate being piped to the PetroSA facility in Mossel Bay,” she adds, “but these decisions are ultimately up to the operator, Total and its partners.”