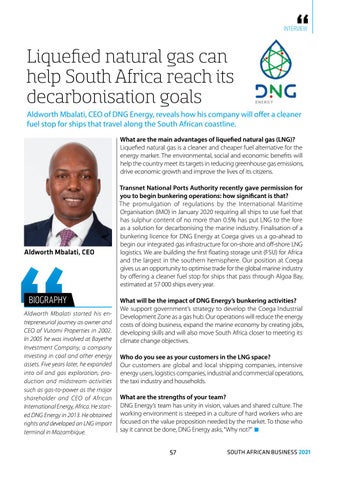 Aldworth Mbalati, CEO of DNG Energy, reveals how his company will offer a cleaner Aldworth Mb Aldworth Mbalati fuel stop for ships that travel along the South African coastline. for s fuelfuel stopstop for ships What are the main advantages of liquefied natural gas (LNG)? Liquefied natural gas is a cleaner and cheaper fuel alternative for the energy market. The environmental, social and economic benefits will help the country meet its targets in reducing greenhouse gas emissions, drive economic growth and improve the lives of its citizens.

BIOGRAPHY Aldworth Mbalati started his entrepreneurial journey as owner and CEO of Vutomi Properties in 2002. In 2005 he was involved at Bayethe Investment Company, a company investing in coal and other energy assets. Five years later, he expanded into oil and gas exploration, production and midstream activities such as gas-to-power as the major shareholder and CEO of African International Energy, Africa. He started DNG Energy in 2013. He obtained rights and developed an LNG import terminal in Mozambique.

Transnet National Ports Authority recently gave permission for you to begin bunkering operations: how significant is that? The promulgation of regulations by the International Maritime Organisation (IMO) in January 2020 requiring all ships to use fuel that has sulphur content of no more than 0.5% has put LNG to the fore as a solution for decarbonising the marine industry. Finalisation of a bunkering licence for DNG Energy at Coega gives us a go-ahead to begin our integrated gas infrastructure for on-shore and off-shore LNG logistics. We are building the first floating storage unit (FSU) Aldworth for Africa Aldworth Mbala Mbalati, C and the largest in the southern hemisphere. Our position at Coega gives us an opportunity to optimise trade for the global marine industry by offering a cleaner fuel stop for ships that pass through Algoa Bay, estimated at 57 000 ships every year.

What will be the impact of DNG Energy’s bunkering activities? BIOGRAPHY BIOGRAPHY We support government’s strategy to develop the Coega Industrial Aldworth Mbalati Aldworth start Development Zone as a gas hub. Our operations will reduce the energy Mbalati trepreneurial journe trepreneurial journey as costs of doing business, expand the marine economy by creating jobs, CEO of Vutomi Pro CEO of Vutomi Properti developing skills and will also move South Africa closer to meeting its In 2005 heinvolved was invo In 2005 he was climate change objectives. Investment Compa Investment Company, a investing in and coal ot a in coal Who do you see as your customers in the LNG space? investing assets. Five years Five years later, la he Our customers are global and local shipping companies, assets. intensive intoand oil gas and explor gas e into oil energy users, logistics companies, industrial and commercial operations, the taxi industry and households. duction and mids duction and midstream as gas-to-pow such such as gas-to-power as What are the strengths of your team? shareholder shareholder and and CEO DNG Energy’s team has unity in vision, values and shared culture. The Energy, International Energy International Afric working environment is steeped in a culture of hard workersedwho edare DNG Energy in 20 DNG Energy in 2013. H focused on the value proposition needed by the market. To those rights and develope rightswho and developed an say it cannot be done, DNG Energy asks, “Why not?” ■ terminal in Mozamb terminal in Mozambique