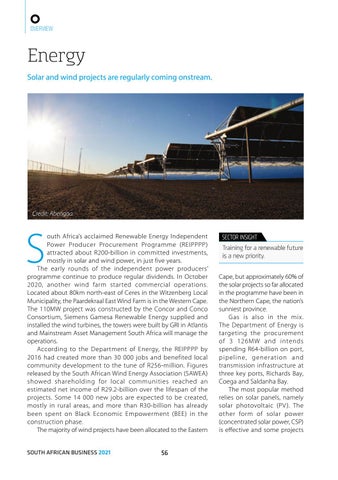 outh Africa’s acclaimed Renewable Energy Independent Power Producer Procurement Programme (REIPPPP) attracted about R200-billion in committed investments, mostly in solar and wind power, in just five years. The early rounds of the independent power producers’ programme continue to produce regular dividends. In October 2020, another wind farm started commercial operations. Located about 80km north-east of Ceres in the Witzenberg Local Municipality, the Paardekraal East Wind Farm is in the Western Cape. The 110MW project was constructed by the Concor and Conco Consortium, Siemens Gamesa Renewable Energy supplied and installed the wind turbines, the towers were built by GRI in Atlantis and Mainstream Asset Management South Africa will manage the operations. According to the Department of Energy, the REIPPPP by 2016 had created more than 30 000 jobs and benefited local community development to the tune of R256-million. Figures released by the South African Wind Energy Association (SAWEA) showed shareholding for local communities reached an estimated net income of R29.2-billion over the lifespan of the projects. Some 14 000 new jobs are expected to be created, mostly in rural areas, and more than R30-billion has already been spent on Black Economic Empowerment (BEE) in the construction phase. The majority of wind projects have been allocated to the Eastern

SECTOR INSIGHT Training for a renewable future is a new priority. Cape, but approximately 60% of the solar projects so far allocated in the programme have been in the Northern Cape, the nation’s sunniest province. Gas is also in the mix. The Department of Energy is targeting the procurement of 3 126MW and intends spending R64-billion on port, pipeline, generation and transmission infrastructure at three key ports, Richards Bay, Coega and Saldanha Bay. The most popular method relies on solar panels, namely solar photovoltaic (PV ). The other form of solar power (concentrated solar power, CSP) is effective and some projects