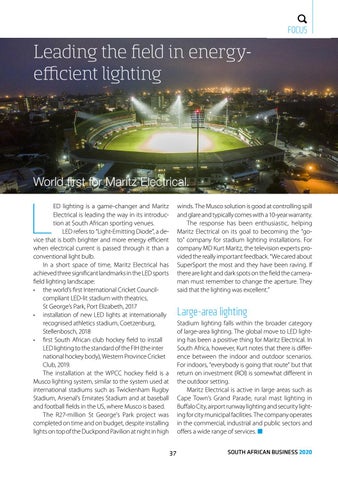 Leading the field in energyefficient lighting

ED lighting is a game-changer and Maritz Electrical is leading the way in its introduction at South African sporting venues. LED refers to “Light-Emitting Diode”, a device that is both brighter and more energy efficient when electrical current is passed through it than a conventional light bulb. In a short space of time, Maritz Electrical has achieved three significant landmarks in the LED sports field lighting landscape: • the world’s first International Cricket Council compliant LED-lit stadium with theatrics, St George’s Park, Port Elizabeth, 2017 • installation of new LED lights at internationally recognised athletics stadium, Coetzenburg, Stellenbosch, 2018 • first South African club hockey field to install LED lighting to the standard of the FIH (the inter national hockey body), Western Province Cricket Club, 2019. The installation at the WPCC hockey field is a Musco lighting system, similar to the system used at international stadiums such as Twickenham Rugby Stadium, Arsenal’s Emirates Stadium and at baseball and football fields in the US, where Musco is based. The R27-million St George’s Park project was completed on time and on budget, despite installing lights on top of the Duckpond Pavilion at night in high

winds. The Musco solution is good at controlling spill and glare and typically comes with a 10-year warranty. The response has been enthusiastic, helping Maritz Electrical on its goal to becoming the “goto” company for stadium lighting installations. For company MD Kurt Maritz, the television experts provided the really important feedback. “We cared about SuperSport the most and they have been raving. If there are light and dark spots on the field the cameraman must remember to change the aperture. They said that the lighting was excellent.”

Large-area lighting Stadium lighting falls within the broader category of large-area lighting. The global move to LED lighting has been a positive thing for Maritz Electrical. In South Africa, however, Kurt notes that there is difference between the indoor and outdoor scenarios. For indoors, “everybody is going that route” but that return on investment (ROI) is somewhat different in the outdoor setting. Maritz Electrical is active in large areas such as Cape Town’s Grand Parade, rural mast lighting in Buffalo City, airport runway lighting and security lighting for city municipal facilities. The company operates in the commercial, industrial and public sectors and offers a wide range of services. ■ SOUTH AFRICAN BUSINESS 2020