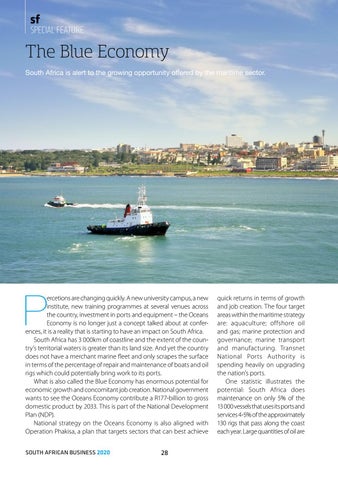 The Blue Economy South Africa is alert to the growing opportunity offered by the maritime sector.

ercetions are changing quickly. A new university campus, a new institute, new training programmes at several venues across the country, investment in ports and equipment – the Oceans Economy is no longer just a concept talked about at conferences, it is a reality that is starting to have an impact on South Africa. South Africa has 3 000km of coastline and the extent of the country’s territorial waters is greater than its land size. And yet the country does not have a merchant marine fleet and only scrapes the surface in terms of the percentage of repair and maintenance of boats and oil rigs which could potentially bring work to its ports. What is also called the Blue Economy has enormous potential for economic growth and concomitant job creation. National government wants to see the Oceans Economy contribute a R177-billion to gross domestic product by 2033. This is part of the National Development Plan (NDP). National strategy on the Oceans Economy is also aligned with Operation Phakisa, a plan that targets sectors that can best achieve SOUTH AFRICAN BUSINESS 2020

quick returns in terms of growth and job creation. The four target areas within the maritime strategy are: aquaculture; offshore oil and gas; marine protection and governance; marine transport and manufacturing. Transnet National Ports Authority is spending heavily on upgrading the nation’s ports. One statistic illustrates the potential: South Africa does maintenance on only 5% of the 13 000 vessels that uses its ports and services 4-5% of the approximately 130 rigs that pass along the coast each year. Large quantities of oil are