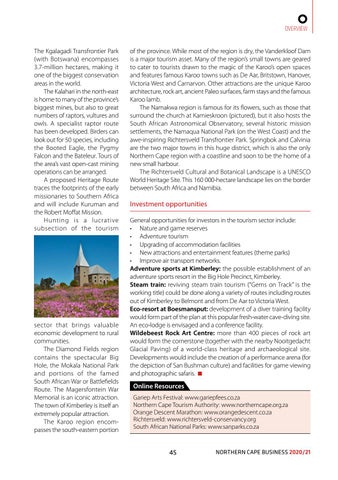 OVERVIEW The Kgalagadi Transfrontier Park (with Botswana) encompasses 3.7-million hectares, making it one of the biggest conservation areas in the world. The Kalahari in the north-east is home to many of the province’s biggest mines, but also to great numbers of raptors, vultures and owls. A specialist raptor route has been developed. Birders can look out for 50 species, including the Booted Eagle, the Pygmy Falcon and the Bateleur. Tours of the area’s vast open-cast mining operations can be arranged. A proposed Heritage Route traces the footprints of the early missionaries to Southern Africa and will include Kuruman and the Robert Moffat Mission. Hunting is a lucrative subsection of the tourism

sector that brings valuable economic development to rural communities. The Diamond Fields region contains the spectacular Big Hole, the Mokala National Park and portions of the famed South African War or Battlefields Route. The Magersfontein War Memorial is an iconic attraction. The town of Kimberley is itself an extremely popular attraction. The Karoo region encompasses the south-eastern portion

of the province. While most of the region is dry, the Vanderkloof Dam is a major tourism asset. Many of the region’s small towns are geared to cater to tourists drawn to the magic of the Karoo’s open spaces and features famous Karoo towns such as De Aar, Britstown, Hanover, Victoria West and Carnarvon. Other attractions are the unique Karoo architecture, rock art, ancient Paleo surfaces, farm stays and the famous Karoo lamb. The Namakwa region is famous for its flowers, such as those that surround the church at Kamieskroon (pictured), but it also hosts the South African Astronomical Observatory, several historic mission settlements, the Namaqua National Park (on the West Coast) and the awe-inspiring Richtersveld Transfrontier Park. Springbok and Calvinia are the two major towns in this huge district, which is also the only Northern Cape region with a coastline and soon to be the home of a new small harbour. The Richtersveld Cultural and Botanical Landscape is a UNESCO World Heritage Site. This 160 000-hectare landscape lies on the border between South Africa and Namibia.

Investment opportunities General opportunities for investors in the tourism sector include: • Nature and game reserves • Adventure tourism • Upgrading of accommodation facilities • New attractions and entertainment features (theme parks) • Improve air transport networks. Adventure sports at Kimberley: the possible establishment of an adventure sports resort in the Big Hole Precinct, Kimberley. Steam train: reviving steam train tourism (“Gems on Track” is the working title) could be done along a variety of routes including routes out of Kimberley to Belmont and from De Aar to Victoria West. Eco-resort at Boesmansput: development of a diver training facility would form part of the plan at this popular fresh-water cave-diving site. An eco-lodge is envisaged and a conference facility. Wildebeest Rock Art Centre: more than 400 pieces of rock art would form the cornerstone (together with the nearby Nooitgedacht Glacial Paving) of a world-class heritage and archaeological site. Developments would include the creation of a performance arena (for the depiction of San Bushman culture) and facilities for game viewing and photographic safaris. ■