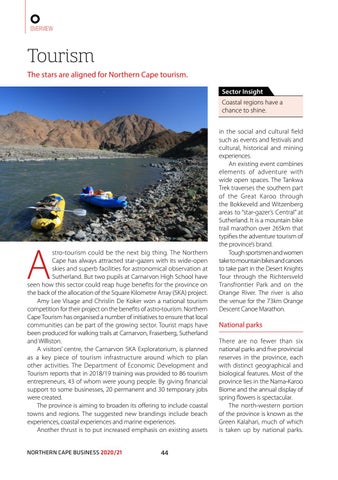 Tourism The stars are aligned for Northern Cape tourism. Sector Insight Coastal regions have a chance to shine.

stro-tourism could be the next big thing. The Northern Cape has always attracted star-gazers with its wide-open skies and superb facilities for astronomical observation at Sutherland. But two pupils at Carnarvon High School have seen how this sector could reap huge benefits for the province on the back of the allocation of the Square Kilometre Array (SKA) project. Amy Lee Visage and Chrislin De Koker won a national tourism competition for their project on the benefits of astro-tourism. Northern Cape Tourism has organised a number of initiatives to ensure that local communities can be part of the growing sector. Tourist maps have been produced for walking trails at Carnarvon, Fraserberg, Sutherland and Williston. A visitors’ centre, the Carnarvon SKA Exploratorium, is planned as a key piece of tourism infrastructure around which to plan other activities. The Department of Economic Development and Tourism reports that in 2018/19 training was provided to 86 tourism entrepreneurs, 43 of whom were young people. By giving financial support to some businesses, 20 permanent and 30 temporary jobs were created. The province is aiming to broaden its offering to include coastal towns and regions. The suggested new brandings include beach experiences, coastal experiences and marine experiences. Another thrust is to put increased emphasis on existing assets

in the social and cultural field such as events and festivals and cultural, historical and mining experiences. An existing event combines elements of adventure with wide open spaces. The Tankwa Trek traverses the southern part of the Great Karoo through the Bokkeveld and Witzenberg areas to “star-gazer’s Central” at Sutherland. It is a mountain bike trail marathon over 265km that typifies the adventure tourism of the province’s brand. Tough sportsmen and women take to mountain bikes and canoes to take part in the Desert Knights Tour through the Richtersveld Transfrontier Park and on the Orange River. The river is also the venue for the 73km Orange Descent Canoe Marathon.