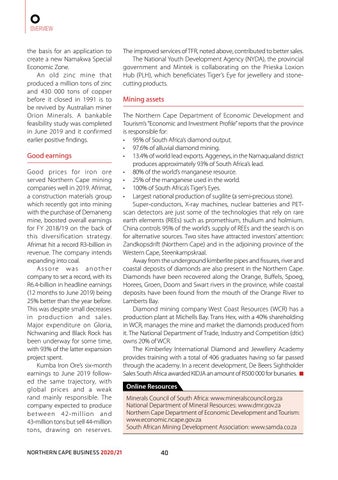 OVERVIEW the basis for an application to create a new Namakwa Special Economic Zone. An old zinc mine that produced a million tons of zinc and 430 000 tons of copper before it closed in 1991 is to be revived by Australian miner Orion Minerals. A bankable feasibility study was completed in June 2019 and it confirmed earlier positive findings.

Good earnings Good prices for iron ore served Northern Cape mining companies well in 2019. Afrimat, a construction materials group which recently got into mining with the purchase of Demaneng mine, boosted overall earnings for FY 2018/19 on the back of this diversification strategy. Afrimat hit a record R3-billion in revenue. The company intends expanding into coal. Assore was another company to set a record, with its R6.4-billion in headline earnings (12 months to June 2019) being 25% better than the year before. This was despite small decreases in production and sales. Major expenditure on Gloria, Nchwaning and Black Rock has been underway for some time, with 93% of the latter expansion project spent. Kumba Iron Ore’s six-month earnings to June 2019 followed the same trajectory, with global prices and a weak rand mainly responsible. The company expected to produce bet ween 42-million and 43-million tons but sell 44-million tons, drawing on reserves. NORTHERN CAPE BUSINESS 2020/21

The improved services of TFR, noted above, contributed to better sales. The National Youth Development Agency (NYDA), the provincial government and Mintek is collaborating on the Prieska Loxion Hub (PLH), which beneficiates Tiger’s Eye for jewellery and stonecutting products.

Mining assets The Northern Cape Department of Economic Development and Tourism’s “Economic and Investment Profile” reports that the province is responsible for: • 95% of South Africa’s diamond output. • 97.6% of alluvial diamond mining. • 13.4% of world lead exports. Aggeneys, in the Namaqualand district produces approximately 93% of South Africa’s lead. • 80% of the world’s manganese resource. • 25% of the manganese used in the world. • 100% of South Africa’s Tiger’s Eyes. • Largest national production of sugilite (a semi-precious stone). Super-conductors, X-ray machines, nuclear batteries and PETscan detectors are just some of the technologies that rely on rare earth elements (REEs) such as promethium, thulium and holmium. China controls 95% of the world’s supply of REEs and the search is on for alternative sources. Two sites have attracted investors’ attention: Zandkopsdrift (Northern Cape) and in the adjoining province of the Western Cape, Steenkampskraal. Away from the underground kimberlite pipes and fissures, river and coastal deposits of diamonds are also present in the Northern Cape. Diamonds have been recovered along the Orange, Buffels, Spoeg, Horees, Groen, Doom and Swart rivers in the province, while coastal deposits have been found from the mouth of the Orange River to Lamberts Bay. Diamond mining company West Coast Resources (WCR) has a production plant at Michells Bay. Trans Hex, with a 40% shareholding in WCR, manages the mine and market the diamonds produced from it. The National Department of Trade, Industry and Competition (dtic) owns 20% of WCR. The Kimberley International Diamond and Jewellery Academy provides training with a total of 406 graduates having so far passed through the academy. In a recent development, De Beers Sightholder Sales South Africa awarded KIDJA an amount of R500 000 for bursaries. ■