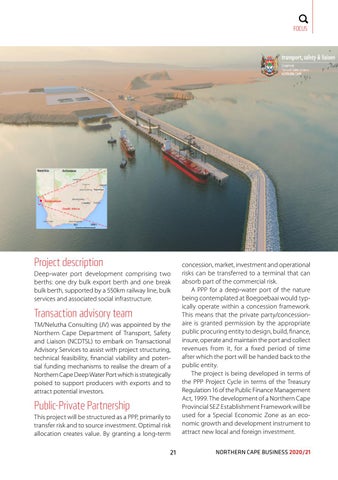 Transaction advisory team TM/Nelutha Consulting (JV) was appointed by the Northern Cape Department of Transport, Safety and Liaison (NCDTSL) to embark on Transactional Advisory Services to assist with project structuring, technical feasibility, financial viability and potential funding mechanisms to realise the dream of a Northern Cape Deep Water Port which is strategically poised to support producers with exports and to attract potential investors.

Public-Private Partnership This project will be structured as a PPP, primarily to transfer risk and to source investment. Optimal risk allocation creates value. By granting a long-term

concession, market, investment and operational risks can be transferred to a terminal that can absorb part of the commercial risk. A PPP for a deep-water port of the nature being contemplated at Boegoebaai would typically operate within a concession framework. This means that the private party/concessionaire is granted permission by the appropriate public procuring entity to design, build, finance, insure, operate and maintain the port and collect revenues from it, for a fixed period of time after which the port will be handed back to the public entity. The project is being developed in terms of the PPP Project Cycle in terms of the Treasury Regulation 16 of the Public Finance Management Act, 1999. The development of a Northern Cape Provincial SEZ Establishment Framework will be used for a Special Economic Zone as an economic growth and development instrument to attract new local and foreign investment. NORTHERN CAPE BUSINESS 2020/21