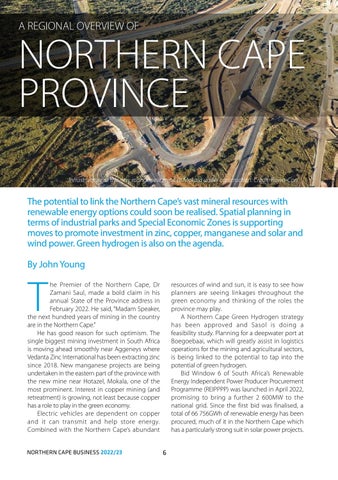 NORTHERN CAPE PROVINCE Infrastructure at the new manganese mine at Mokala under construction. Credit: Ruwa-Con

The potential to link the Northern Cape’s vast mineral resources with renewable energy options could soon be realised. Spatial planning in terms of industrial parks and Special Economic Zones is supporting moves to promote investment in zinc, copper, manganese and solar and wind power. Green hydrogen is also on the agenda. By John Young

resources of wind and sun, it is easy to see how planners are seeing linkages throughout the green economy and thinking of the roles the province may play. A Northern Cape Green Hydrogen strategy has been approved and Sasol is doing a feasibility study. Planning for a deepwater port at Boegoebaai, which will greatly assist in logistics operations for the mining and agricultural sectors, is being linked to the potential to tap into the potential of green hydrogen. Bid Window 6 of South Africa’s Renewable Energy Independent Power Producer Procurement Programme (REIPPPP) was launched in April 2022, promising to bring a further 2 600MW to the national grid. Since the first bid was finalised, a total of 66 756GWh of renewable energy has been procured, much of it in the Northern Cape which has a particularly strong suit in solar power projects.

he Premier of the Northern Cape, Dr Zamani Saul, made a bold claim in his annual State of the Province address in February 2022. He said, “Madam Speaker, the next hundred years of mining in the country are in the Northern Cape.” He has good reason for such optimism. The single biggest mining investment in South Africa is moving ahead smoothly near Aggeneys where Vedanta Zinc International has been extracting zinc since 2018. New manganese projects are being undertaken in the eastern part of the province with the new mine near Hotazel, Mokala, one of the most prominent. Interest in copper mining (and retreatment) is growing, not least because copper has a role to play in the green economy. Electric vehicles are dependent on copper and it can transmit and help store energy. Combined with the Northern Cape’s abundant NORTHERN CAPE BUSINESS 2022/23