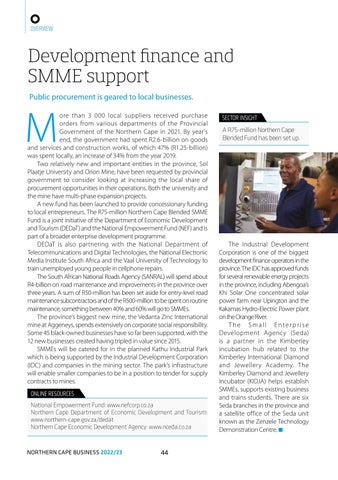 ore than 3 000 local suppliers received purchase orders from various departments of the Provincial Government of the Northern Cape in 2021. By year’s end, the government had spent R2.6-billion on goods and services and construction works, of which 47% (R1.25-billion) was spent locally, an increase of 34% from the year 2019. Two relatively new and important entities in the province, Sol Plaatje University and Orion Mine, have been requested by provincial government to consider looking at increasing the local share of procurement opportunities in their operations. Both the university and the mine have multi-phase expansion projects. A new fund has been launched to provide concessionary funding to local entrepreneurs. The R75-million Northern Cape Blended SMME Fund is a joint initiative of the Department of Economic Development and Tourism (DEDaT) and the National Empowerment Fund (NEF) and is part of a broader enterprise development programme. DEDaT is also partnering with the National Department of Telecommunications and Digital Technologies, the National Electronic Media Institute South Africa and the Vaal University of Technology to train unemployed young people in cellphone repairs. The South African National Roads Agency (SANRAL) will spend about R4-billion on road maintenance and improvements in the province over three years. A sum of R50-million has been set aside for entry-level road maintenance subcontractors and of the R500-million to be spent on routine maintenance, something between 40% and 60% will go to SMMEs. The province’s biggest new mine, the Vedanta Zinc International mine at Aggeneys, spends extensively on corporate social responsibility. Some 45 black-owned businesses have so far been supported, with the 12 new businesses created having tripled in value since 2015. SMMEs will be catered for in the planned Kathu Industrial Park which is being supported by the Industrial Development Corporation (IDC) and companies in the mining sector. The park’s infrastructure will enable smaller companies to be in a position to tender for supply contracts to mines.

SECTOR INSIGHT A R75-million Northern Cape Blended Fund has been set up.

The Industrial Development Corporation is one of the biggest development finance operators in the province. The IDC has approved funds for several renewable energy projects in the province, including Abengoa’s Khi Solar One concentrated solar power farm near Upington and the Kakamas Hydro-Electric Power plant on the Orange River. The Small Enterprise Development Agency (Seda) is a partner in the Kimberley incubation hub related to the Kimberley International Diamond and Jewellery Academy. The Kimberley Diamond and Jewellery Incubator (KIDJA) helps establish SMMEs, supports existing business and trains students. There are six Seda branches in the province and a satellite office of the Seda unit known as the Zenzele Technology Demonstration Centre. ■