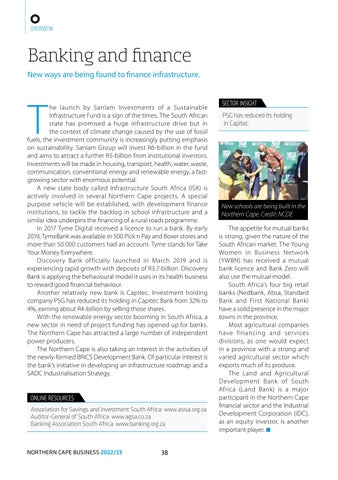 Banking and finance New ways are being found to finance infrastructure.

he launch by Sanlam Investments of a Sustainable Infrastructure Fund is a sign of the times. The South African state has promised a huge infrastructure drive but in the context of climate change caused by the use of fossil fuels, the investment community is increasingly putting emphasis on sustainability. Sanlam Group will invest R6-billion in the fund and aims to attract a further R5-billion from institutional investors. Investments will be made in housing, transport, health, water, waste, communication, conventional energy and renewable energy, a fastgrowing sector with enormous potential. A new state body called Infrastructure South Africa (ISA) is actively involved in several Northern Cape projects. A special purpose vehicle will be established, with development finance institutions, to tackle the backlog in school infrastructure and a similar idea underpins the financing of a rural roads programme. In 2017 Tyme Digital received a licence to run a bank. By early 2019, TymeBank was available in 500 Pick n Pay and Boxer stores and more than 50 000 customers had an account. Tyme stands for Take Your Money Everywhere. Discovery Bank officially launched in March 2019 and is experiencing rapid growth with deposits of R3.7-billion. Discovery Bank is applying the behavioural model it uses in its health business to reward good financial behaviour. Another relatively new bank is Capitec. Investment holding company PSG has reduced its holding in Capitec Bank from 32% to 4%, earning about R4-billion by selling those shares. With the renewable energy sector booming in South Africa, a new sector in need of project funding has opened up for banks. The Northern Cape has attracted a large number of independent power producers. The Northern Cape is also taking an interest in the activities of the newly-formed BRICS Development Bank. Of particular interest is the bank’s initiative in developing an infrastructure roadmap and a SADC Industrialisation Strategy.

SECTOR INSIGHT PSG has reduced its holding in Capitec.

New schools are being built in the Northern Cape. Credit: NCDE The appetite for mutual banks is strong, given the nature of the South African market. The Young Women in Business Network (YWBN) has received a mutual bank licence and Bank Zero will also use the mutual model. South Africa’s four big retail banks (Nedbank, Absa, Standard Bank and First National Bank) have a solid presence in the major towns in the province. Most agricultural companies have financing and services divisions, as one would expect in a province with a strong and varied agricultural sector which exports much of its produce. The Land and Agricultural Development Bank of South Africa (Land Bank) is a major participant in the Northern Cape financial sector and the Industrial Development Corporation (IDC), as an equity investor, is another important player. ■