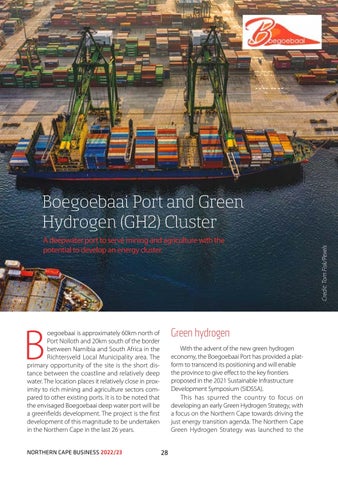 A deepwater port to serve mining and agriculture with the potential to develop an energy cluster.

Development Plan. To achieve this

which starts with the development

Zone, and the Boegoebaai Harbou

These projects are significant in bu

growth potential in realizing the N

and to achieve sustainable develo of our vision 2040.

As the Northern Cape, we have em

and compliment this with the globa

oegoebaai is approximately 60km north of Port Nolloth and 20km south of the border between Namibia and South Africa in the Richtersveld Local Municipality area. The primary opportunity of the site is the short distance between the coastline and relatively deep water. The location places it relatively close in proximity to rich mining and agriculture sectors compared to other existing ports. It is to be noted that the envisaged Boegoebaai deep water port will be a greenfields development. The project is the first development of this magnitude to be undertaken in the Northern Cape in the last 26 years. NORTHERN CAPE BUSINESS 2022/23

With the advent of the new green hydrogen economy, the Boegoebaai Port has provided a platform to transcend its positioning and will enable the province to give effect to the key frontiers proposed in the 2021 Sustainable Infrastructure Development Symposium (SIDSSA). This has spurred the country to focus on developing an early Green Hydrogen Strategy, with a focus on the Northern Cape towards driving the just energy transition agenda. The Northern Cape Green Hydrogen Strategy was launched to the