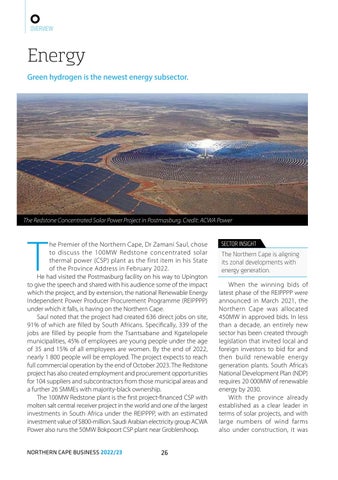 he Premier of the Northern Cape, Dr Zamani Saul, chose to discuss the 100MW Redstone concentrated solar thermal power (CSP) plant as the first item in his State of the Province Address in February 2022. He had visited the Postmasburg facility on his way to Upington to give the speech and shared with his audience some of the impact which the project, and by extension, the national Renewable Energy Independent Power Producer Procurement Programme (REIPPPP) under which it falls, is having on the Northern Cape. Saul noted that the project had created 636 direct jobs on site, 91% of which are filled by South Africans. Specifically, 339 of the jobs are filled by people from the Tsantsabane and Kgatelopele municipalities, 45% of employees are young people under the age of 35 and 15% of all employees are women. By the end of 2022, nearly 1 800 people will be employed. The project expects to reach full commercial operation by the end of October 2023. The Redstone project has also created employment and procurement opportunities for 104 suppliers and subcontractors from those municipal areas and a further 26 SMMEs with majority-black ownership. The 100MW Redstone plant is the first project-financed CSP with molten salt central receiver project in the world and one of the largest investments in South Africa under the REIPPPP, with an estimated investment value of $800-million. Saudi Arabian electricity group ACWA Power also runs the 50MW Bokpoort CSP plant near Groblershoop. NORTHERN CAPE BUSINESS 2022/23

SECTOR INSIGHT The Northern Cape is aligning its zonal developments with energy generation. When the winning bids of latest phase of the REIPPPP were announced in March 2021, the Northern Cape was allocated 450MW in approved bids. In less than a decade, an entirely new sector has been created through legislation that invited local and foreign investors to bid for and then build renewable energy generation plants. South Africa’s National Development Plan (NDP) requires 20 000MW of renewable energy by 2030. With the province already established as a clear leader in terms of solar projects, and with large numbers of wind farms also under construction, it was