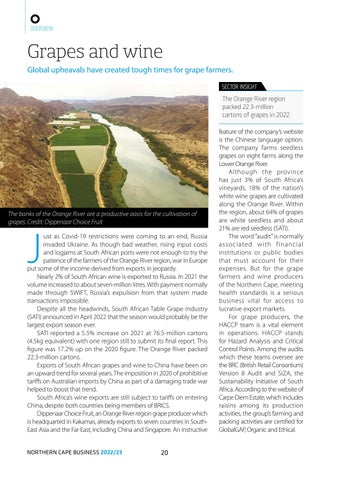 The banks of the Orange River are a productive oasis for the cultivation of grapes. Credit: Dippenaar Choice Fruit

ust as Covid-19 restrictions were coming to an end, Russia invaded Ukraine. As though bad weather, rising input costs and logjams at South African ports were not enough to try the patience of the farmers of the Orange River region, war in Europe put some of the income derived from exports in jeopardy. Nearly 2% of South African wine is exported to Russia. In 2021 the volume increased to about seven-million litres. With payment normally made through SWIFT, Russia’s expulsion from that system made transactions impossible. Despite all the headwinds, South African Table Grape Industry (SATI) announced in April 2022 that the season would probably be the largest export season ever. SATI reported a 5.5% increase on 2021 at 76.5-million cartons (4.5kg equivalent) with one region still to submit its final report. This figure was 17.2% up on the 2020 figure. The Orange River packed 22.3-million cartons. Exports of South African grapes and wine to China have been on an upward trend for several years. The imposition in 2020 of prohibitive tariffs on Australian imports by China as part of a damaging trade war helped to boost that trend. South Africa’s wine exports are still subject to tariffs on entering China, despite both countries being members of BRICS. Dippenaar Choice Fruit, an Orange River region grape producer which is headquarted in Kakamas, already exports to seven countries in SouthEast Asia and the Far East, including China and Singapore. An instructive

feature of the company’s website is the Chinese language option. The company farms seedless grapes on eight farms along the Lower Orange River. Although the province has just 3% of South Africa’s vineyards, 18% of the nation’s white wine grapes are cultivated along the Orange River. Within the region, about 64% of grapes are white seedless and about 21% are red seedless (SATI). The word “audit” is normally associated with financial institutions or public bodies that must account for their expenses. But for the grape farmers and wine producers of the Northern Cape, meeting health standards is a serious business vital for access to lucrative export markets. For grape producers, the HACCP team is a vital element in operations. HACCP stands for Hazard Analysis and Critical Control Points. Among the audits which these teams oversee are the BRC (British Retail Consortium) Version 8 Audit and SiZA, the Sustainability Initiative of South Africa. According to the website of Carpe Diem Estate, which includes raisins among its production activities, the group’s farming and packing activities are certified for GlobalGAP, Organic and Ethical.