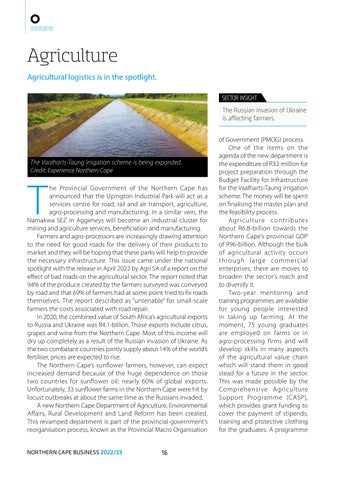 Agriculture Agricultural logistics is in the spotlight. SECTOR INSIGHT The Russian invasion of Ukraine is affecting farmers.

he Provincial Government of the Northern Cape has announced that the Upington Industrial Park will act as a services centre for road, rail and air transport, agriculture, agro-processing and manufacturing. In a similar vein, the Namakwa SEZ in Aggeneys will become an industrial cluster for mining and agriculture services, beneficiation and manufacturing. Farmers and agro-processors are increasingly drawing attention to the need for good roads for the delivery of their products to market and they will be hoping that these parks will help to provide the necessary infrastructure. This issue came under the national spotlight with the release in April 2022 by Agri SA of a report on the effect of bad roads on the agricultural sector. The report noted that 94% of the produce created by the farmers surveyed was conveyed by road and that 69% of farmers had at some point tried to fix roads themselves. The report described as “untenable” for small-scale farmers the costs associated with road repair. In 2020, the combined value of South Africa’s agricultural exports to Russia and Ukraine was R4.1-billion. Those exports include citrus, grapes and wine from the Northern Cape. Most of this income will dry up completely as a result of the Russian invasion of Ukraine. As the two combatant countries jointly supply about 14% of the world’s fertiliser, prices are expected to rise. The Northern Cape’s sunflower farmers, however, can expect increased demand because of the huge dependence on those two countries for sunflower oil; nearly 60% of global exports. Unfortunately, 33 sunflower farms in the Northern Cape were hit by locust outbreaks at about the same time as the Russians invaded. A new Northern Cape Department of Agriculture, Environmental Affairs, Rural Development and Land Reform has been created. This revamped department is part of the provincial government’s reorganisation process, known as the Provincial Macro Organisation NORTHERN CAPE BUSINESS 2022/23

of Government (PMOG) process. One of the items on the agenda of the new department is the expenditure of R32-million for project preparation through the Budget Facility for Infrastructure for the Vaalharts-Taung irrigation scheme. The money will be spent on finalising the master plan and the feasibility process. Agr i c u l t u re c o n t r i b u te s about R6.8-billion towards the Northern Cape’s provincial GDP of R96-billion. Although the bulk of agricultural activity occurs through large commercial enterprises, there are moves to broaden the sector’s reach and to diversify it. Two-year mentoring and training programmes are available for young people interested in taking up farming. At the moment, 75 young graduates are employed on farms or in agro-processing firms and will develop skills in many aspects of the agricultural value chain which will stand them in good stead for a future in the sector. This was made possible by the Comprehensive Agriculture Support Programme (CASP), which provides grant funding to cover the payment of stipends, training and protective clothing for the graduates. A programme