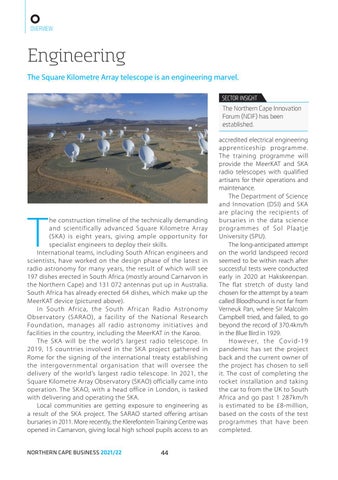 he construction timeline of the technically demanding and scientifically advanced Square Kilometre Array (SKA) is eight years, giving ample opportunity for specialist engineers to deploy their skills. International teams, including South African engineers and scientists, have worked on the design phase of the latest in radio astronomy for many years, the result of which will see 197 dishes erected in South Africa (mostly around Carnarvon in the Northern Cape) and 131 072 antennas put up in Australia. South Africa has already erected 64 dishes, which make up the MeerKAT device (pictured above). In South Africa, the South African Radio Astronomy Obser vator y (SARAO), a facility of the National Research Foundation, manages all radio astronomy initiatives and facilities in the country, including the MeerKAT in the Karoo. The SKA will be the world’s largest radio telescope. In 2019, 15 countries involved in the SKA project gathered in Rome for the signing of the international treaty establishing the intergovernmental organisation that will oversee the delivery of the world’s largest radio telescope. In 2021, the Square Kilometre Array Observatory (SKAO) officially came into operation. The SKAO, with a head office in London, is tasked with delivering and operating the SKA. Local communities are getting exposure to engineering as a result of the SKA project. The SARAO started offering artisan bursaries in 2011. More recently, the Klerefontein Training Centre was opened in Carnarvon, giving local high school pupils access to an NORTHERN CAPE BUSINESS 2021/22

accredited electrical engineering apprenticeship programme. The training programme will provide the MeerKAT and SKA radio telescopes with qualified artisans for their operations and maintenance. The Department of Science and Innovation (DSI) and SKA are placing the recipients of bursaries in the data science programmes of Sol Plaatje University (SPU). The long-anticipated attempt on the world landspeed record seemed to be within reach after successful tests were conducted early in 2020 at Hakskeenpan. The flat stretch of dusty land chosen for the attempt by a team called Bloodhound is not far from Verneuk Pan, where Sir Malcolm Campbell tried, and failed, to go beyond the record of 370.4km/h in the Blue Bird in 1929. H o w e v e r, t h e C o v i d - 1 9 pandemic has set the project back and the current owner of the project has chosen to sell it. The cost of completing the rocket installation and taking the car to from the UK to South Africa and go past 1 287km/h is estimated to be £8-million, based on the costs of the test programmes that have been completed.