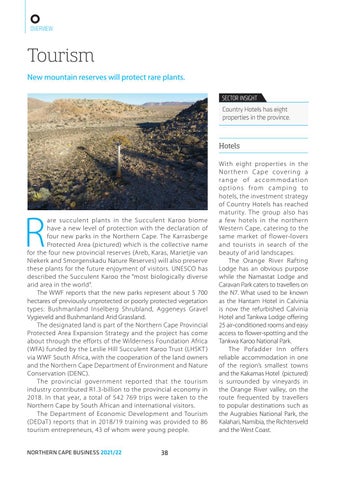 are succulent plants in the Succulent Karoo biome have a new level of protection with the declaration of four new parks in the Northern Cape. The Karrasberge Protected Area (pictured) which is the collective name for the four new provincial reserves (Areb, Karas, Marietjie van Niekerk and Smorgenskadu Nature Reserves) will also preserve these plants for the future enjoyment of visitors. UNESCO has described the Succulent Karoo the “most biologically diverse arid area in the world”. The WWF reports that the new parks represent about 5 700 hectares of previously unprotected or poorly protected vegetation types: Bushmanland Inselberg Shrubland, Aggeneys Gravel Vygieveld and Bushmanland Arid Grassland. The designated land is part of the Northern Cape Provincial Protected Area Expansion Strategy and the project has come about through the efforts of the Wilderness Foundation Africa ( WFA) funded by the Leslie Hill Succulent Karoo Trust (LHSKT ) via WWF South Africa, with the cooperation of the land owners and the Northern Cape Department of Environment and Nature Conservation (DENC). The provincial government reported that the tourism industry contributed R1.3-billion to the provincial economy in 2018. In that year, a total of 542 769 trips were taken to the Northern Cape by South African and international visitors. The Department of Economic Development and Tourism (DEDaT ) reports that in 2018/19 training was provided to 86 tourism entrepreneurs, 43 of whom were young people.

With eight properties in the Nor ther n Cape cover ing a range of accommodation o p t i o n s f ro m c a m p i n g t o hotels, the investment strategy of Country Hotels has reached maturity. The group also has a few hotels in the northern Western Cape, catering to the same market of flower-lovers and tourists in search of the beauty of arid landscapes. The Orange River Rafting Lodge has an obvious purpose while the Namastat Lodge and Caravan Park caters to travellers on the N7. What used to be known as the Hantam Hotel in Calvinia is now the refurbished Calvinia Hotel and Tankwa Lodge offering 25 air-conditioned rooms and easy access to flower-spotting and the Tankwa Karoo National Park. The Pofadder Inn offers reliable accommodation in one of the region’s smallest towns and the Kakamas Hotel (pictured) is surrounded by vineyards in the Orange River valley, on the route frequented by travellers to popular destinations such as the Augrabies National Park, the Kalahari, Namibia, the Richtersveld and the West Coast.