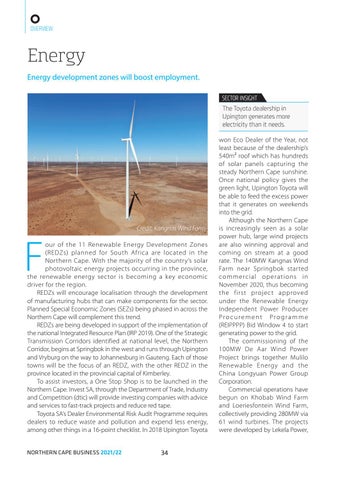 our of the 11 Renewable Energy Development Zones (REDZs) planned for South Africa are located in the Northern Cape. With the majority of the country’s solar photovoltaic energy projects occurring in the province, the renewable energy sector is becoming a key economic driver for the region. REDZs will encourage localisation through the development of manufacturing hubs that can make components for the sector. Planned Special Economic Zones (SEZs) being phased in across the Northern Cape will complement this trend. REDZs are being developed in support of the implementation of the national Integrated Resource Plan (IRP 2019). One of the Strategic Transmission Corridors identified at national level, the Northern Corridor, begins at Springbok in the west and runs through Upington and Vryburg on the way to Johannesburg in Gauteng. Each of those towns will be the focus of an REDZ, with the other REDZ in the province located in the provincial capital of Kimberley. To assist investors, a One Stop Shop is to be launched in the Northern Cape. Invest SA, through the Department of Trade, Industry and Competition (dtic) will provide investing companies with advice and services to fast-track projects and reduce red tape. Toyota SA’s Dealer Environmental Risk Audit Programme requires dealers to reduce waste and pollution and expend less energy, among other things in a 16-point checklist. In 2018 Upington Toyota

won Eco Dealer of the Year, not least because of the dealership’s 540m² roof which has hundreds of solar panels capturing the steady Northern Cape sunshine. Once national policy gives the green light, Upington Toyota will be able to feed the excess power that it generates on weekends into the grid. Although the Northern Cape is increasingly seen as a solar power hub, large wind projects are also winning approval and coming on stream at a good rate. The 140MW Kangnas Wind Farm near Springbok started commercial operations in November 2020, thus becoming the first project approved under the Renewable Energy Independent Power Producer Procurement Programme (REIPPPP) Bid Window 4 to start generating power to the grid. The commissioning of the 100MW De Aar Wind Power Project brings together Mulilo Renewable Energy and the China Longyuan Power Group Corporation. Commercial operations have begun on Khobab Wind Farm and Loeriesfontein Wind Farm, collectively providing 280MW via 61 wind turbines. The projects were developed by Lekela Power,