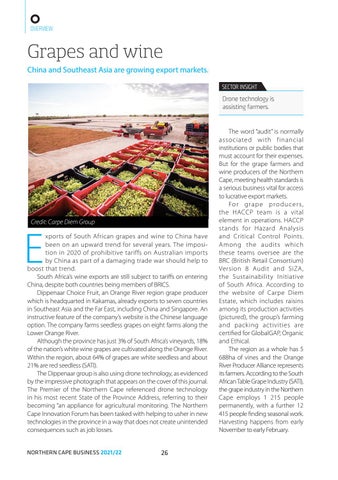 xports of South African grapes and wine to China have been on an upward trend for several years. The imposition in 2020 of prohibitive tariffs on Australian imports by China as part of a damaging trade war should help to boost that trend. South Africa’s wine exports are still subject to tariffs on entering China, despite both countries being members of BRICS. Dippenaar Choice Fruit, an Orange River region grape producer which is headquarted in Kakamas, already exports to seven countries in Southeast Asia and the Far East, including China and Singapore. An instructive feature of the company’s website is the Chinese language option. The company farms seedless grapes on eight farms along the Lower Orange River. Although the province has just 3% of South Africa’s vineyards, 18% of the nation’s white wine grapes are cultivated along the Orange River. Within the region, about 64% of grapes are white seedless and about 21% are red seedless (SATI). The Dippenaar group is also using drone technology, as evidenced by the impressive photograph that appears on the cover of this journal. The Premier of the Northern Cape referenced drone technology in his most recent State of the Province Address, referring to their becoming “an appliance for agricultural monitoring. The Northern Cape Innovation Forum has been tasked with helping to usher in new technologies in the province in a way that does not create unintended consequences such as job losses.

The word “audit” is normally associated with financial institutions or public bodies that must account for their expenses. But for the grape farmers and wine producers of the Northern Cape, meeting health standards is a serious business vital for access to lucrative export markets. Fo r g r a p e p ro d u c e r s, the HACCP team is a vital element in operations. HACCP stands for Hazard Analysis and Critical Control Points. Among the audits which these teams oversee are the BRC (British Retail Consortium) Version 8 Audit and SiZA, the Sustainability Initiative of South Africa. According to the website of Carpe Diem Estate, which includes raisins among its production activities (pictured), the group’s farming and packing activities are certified for GlobalGAP, Organic and Ethical. The region as a whole has 5 688ha of vines and the Orange River Producer Alliance represents its farmers. According to the South African Table Grape Industry (SATI), the grape industry in the Northern Cape employs 1 215 people permanently, with a further 12 415 people finding seasonal work. Harvesting happens from early November to early February.