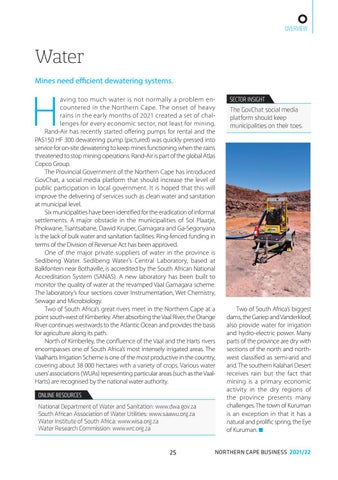 aving too much water is not normally a problem encountered in the Northern Cape. The onset of heavy rains in the early months of 2021 created a set of challenges for every economic sector, not least for mining. Rand-Air has recently started offering pumps for rental and the PAS150 HF 300 dewatering pump (pictured) was quickly pressed into service for on-site dewatering to keep mines functioning when the rains threatened to stop mining operations. Rand-Air is part of the global Atlas Copco Group. The Provincial Government of the Northern Cape has introduced GovChat, a social media platform that should increase the level of public participation in local government. It is hoped that this will improve the delivering of services such as clean water and sanitation at municipal level. Six municipalities have been identified for the eradication of informal settlements. A major obstacle in the municipalities of Sol Plaatje, Phokwane, Tsantsabane, Dawid Kruiper, Gamagara and Ga-Segonyana is the lack of bulk water and sanitation facilities. Ring-fenced funding in terms of the Division of Revenue Act has been approved. One of the major private suppliers of water in the province is Sedibeng Water. Sedibeng Water’s Central Laboratory, based at Balkfontein near Bothaville, is accredited by the South African National Accreditation System (SANAS). A new laboratory has been built to monitor the quality of water at the revamped Vaal Gamagara scheme. The laboratory’s four sections cover Instrumentation, Wet Chemistry, Sewage and Microbiology. Two of South Africa’s great rivers meet in the Northern Cape at a point south-west of Kimberley. After absorbing the Vaal River, the Orange River continues westwards to the Atlantic Ocean and provides the basis for agriculture along its path. North of Kimberley, the confluence of the Vaal and the Harts rivers encompasses one of South Africa’s most intensely irrigated areas. The Vaalharts Irrigation Scheme is one of the most productive in the country, covering about 38 000 hectares with a variety of crops. Various water users’ associations (WUAs) representing particular areas (such as the VaalHarts) are recognised by the national water authority.

SECTOR INSIGHT The GovChat social media platform should keep municipalities on their toes.

Two of South Africa’s biggest dams, the Gariep and Vanderkloof, also provide water for irrigation and hydro-electric power. Many parts of the province are dry with sections of the north and northwest classified as semi-arid and arid. The southern Kalahari Desert receives rain but the fact that mining is a primary economic activity in the dry regions of the province presents many challenges. The town of Kuruman is an exception in that it has a natural and prolific spring, the Eye of Kuruman. ■