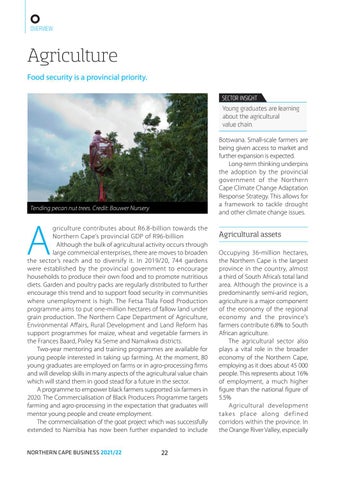 Agriculture Food security is a provincial priority. SECTOR INSIGHT Young graduates are learning about the agricultural value chain. Botswana. Small-scale farmers are being given access to market and further expansion is expected. Long-term thinking underpins the adoption by the provincial government of the Northern Cape Climate Change Adaptation Response Strategy. This allows for a framework to tackle drought and other climate change issues.

griculture contributes about R6.8-billion towards the Northern Cape’s provincial GDP of R96-billion Although the bulk of agricultural activity occurs through large commercial enterprises, there are moves to broaden the sector’s reach and to diversify it. In 2019/20, 744 gardens were established by the provincial government to encourage households to produce their own food and to promote nutritious diets. Garden and poultry packs are regularly distributed to further encourage this trend and to support food security in communities where unemployment is high. The Fetsa Tlala Food Production programme aims to put one-million hectares of fallow land under grain production. The Northern Cape Department of Agriculture, Environmental Affairs, Rural Development and Land Reform has support programmes for maize, wheat and vegetable farmers in the Frances Baard, Pixley Ka Seme and Namakwa districts. Two-year mentoring and training programmes are available for young people interested in taking up farming. At the moment, 80 young graduates are employed on farms or in agro-processing firms and will develop skills in many aspects of the agricultural value chain which will stand them in good stead for a future in the sector. A programme to empower black farmers supported six farmers in 2020. The Commercialisation of Black Producers Programme targets farming and agro-processing in the expectation that graduates will mentor young people and create employment. The commercialisation of the goat project which was successfully extended to Namibia has now been further expanded to include

Agricultural assets Occupying 36-million hectares, the Northern Cape is the largest province in the country, almost a third of South Africa’s total land area. Although the province is a predominantly semi-arid region, agriculture is a major component of the economy of the regional economy and the province’s farmers contribute 6.8% to South African agriculture. The agricultural sector also plays a vital role in the broader economy of the Northern Cape, employing as it does about 45 000 people. This represents about 16% of employment, a much higher figure than the national figure of 5.5% Agricultural development takes place along defined corridors within the province. In the Orange River Valley, especially