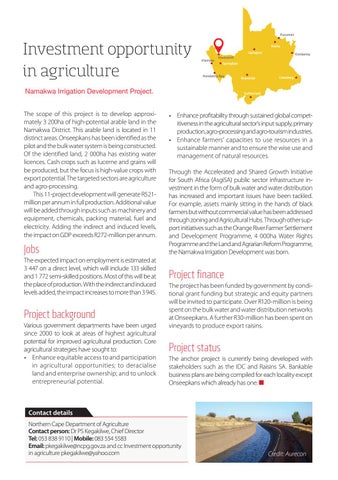 Investment opportunity in agriculture Namakwa Irrigation Development Project. The scope of this project is to develop approximately 3 200ha of high-potential arable land in the Namakwa District. This arable land is located in 11 distinct areas. Onseepkans has been identified as the pilot and the bulk water system is being constructed. Of the identified land, 2 000ha has existing water licences. Cash crops such as lucerne and grains will be produced, but the focus is high-value crops with export potential. The targeted sectors are agriculture and agro-processing. This 11-project development will generate R521million per annum in full production. Additional value will be added through inputs such as machinery and equipment, chemicals, packing material, fuel and electricity. Adding the indirect and induced levels, the impact on GDP exceeds R272-million per annum.

Jobs The expected impact on employment is estimated at 3 447 on a direct level, which will include 133 skilled and 1 772 semi-skilled positions. Most of this will be at the place of production. With the indirect and induced levels added, the impact increases to more than 3 945.

Project background Various government departments have been urged since 2000 to look at areas of highest agricultural potential for improved agricultural production. Core agricultural strategies have sought to: • Enhance equitable access to and participation in agricultural opportunities; to deracialise land and enterprise ownership; and to unlock entrepreneurial potential.

Enhance profitability through sustained global competitiveness in the agricultural sector’s input supply, primary production, agro-processing and agro-tourism industries. Enhance farmers’ capacities to use resources in a sustainable manner and to ensure the wise use and management of natural resources.

Through the Accelerated and Shared Growth Initiative for South Africa (AsgiSA) public sector infrastructure investment in the form of bulk water and water distribution has increased and important issues have been tackled. For example, assets mainly sitting in the hands of black farmers but without commercial value has been addressed through zoning and Agricultural Hubs. Through other support initiatives such as the Orange River Farmer Settlement and Development Programme, 4 000ha Water Rights Programme and the Land and Agrarian Reform Programme, the Namakwa Irrigation Development was born.

Project finance The project has been funded by government by conditional grant funding but strategic and equity partners will be invited to participate. Over R120-million is being spent on the bulk water and water distribution networks at Onseepkans. A further R30-million has been spent on vineyards to produce export raisins.

Project status The anchor project is currently being developed with stakeholders such as the IDC and Raisins SA. Bankable business plans are being compiled for each locality except Onseepkans which already has one. ■