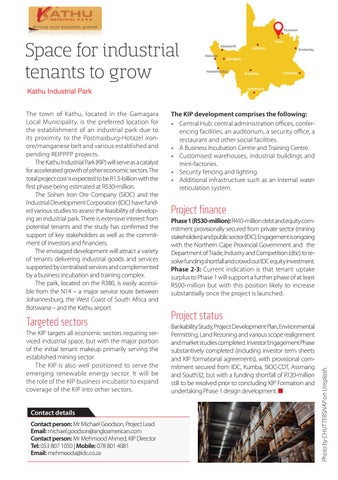 Targeted sectors The KIP targets all economic sectors requiring serviced industrial space, but with the major portion of the initial tenant makeup primarily serving the established mining sector. The KIP is also well positioned to serve the emerging renewable energy sector. It will be the role of the KIP business incubator to expand coverage of the KIP into other sectors.

Project finance Phase 1 (R530-million): R410-million debt and equity commitment provisionally secured from private sector (mining stakeholders) and public sector (IDC). Engagement is ongoing with the Northern Cape Provincial Government and the Department of Trade, Industry and Competition (dtic) to resolve funding shortfall and crowd out IDC equity investment. Phase 2-3: Current indication is that tenant uptake surplus to Phase 1 will support a further phase of at least R500-million but with this position likely to increase substantially once the project is launched.

Photo by CHUTTERSNAP on Unsplash.

The town of Kathu, located in the Gamagara Local Municipality, is the preferred location for the establishment of an industrial park due to its proximity to the Postmasburg-Hotazel ironore/manganese belt and various established and pending REIPPPP projects. The Kathu Industrial Park (KIP) will serve as a catalyst for accelerated growth of other economic sectors. The total project cost is expected to be R1.5-billion with the first phase being estimated at R530-million. The Sishen Iron Ore Company (SIOC) and the Industrial Development Corporation (IDC) have funded various studies to assess the feasibility of developing an industrial park. There is extensive interest from potential tenants and the study has confirmed the support of key stakeholders as well as the commitment of investors and financiers. The envisaged development will attract a variety of tenants delivering industrial goods and services supported by centralised services and complemented by a business incubation and training complex. The park, located on the R380, is easily accessible from the N14 – a major service route between Johannesburg, the West Coast of South Africa and Botswana – and the Kathu airport.