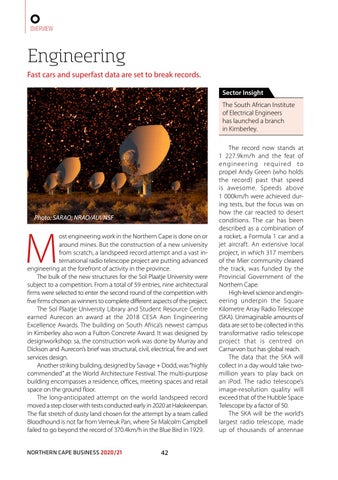 Engineering Fast cars and superfast data are set to break records. Sector Insight The South African Institute of Electrical Engineers has launched a branch in Kimberley.

ost engineering work in the Northern Cape is done on or around mines. But the construction of a new university from scratch, a landspeed record attempt and a vast international radio telescope project are putting advanced engineering at the forefront of activity in the province. The bulk of the new structures for the Sol Plaatje University were subject to a competition. From a total of 59 entries, nine architectural firms were selected to enter the second round of the competition with five firms chosen as winners to complete different aspects of the project. The Sol Plaatje University Library and Student Resource Centre earned Aurecon an award at the 2018 CESA Aon Engineering Excellence Awards. The building on South Africa’s newest campus in Kimberley also won a Fulton Concrete Award. It was designed by designworkshop: sa, the construction work was done by Murray and Dickson and Aurecon’s brief was structural, civil, electrical, fire and wet services design. Another striking building, designed by Savage + Dodd, was “highly commended” at the World Architecture Festival. The multi-purpose building encompasses a residence, offices, meeting spaces and retail space on the ground floor. The long-anticipated attempt on the world landspeed record moved a step closer with tests conducted early in 2020 at Hakskeenpan. The flat stretch of dusty land chosen for the attempt by a team called Bloodhound is not far from Verneuk Pan, where Sir Malcolm Campbell failed to go beyond the record of 370.4km/h in the Blue Bird in 1929.

The record now stands at 1 227.9km/h and the feat of engineer ing required to propel Andy Green (who holds the record) past that speed is awesome. Speeds above 1 000km/h were achieved during tests, but the focus was on how the car reacted to desert conditions. The car has been described as a combination of a rocket, a Formula 1 car and a jet aircraft. An extensive local project, in which 317 members of the Mier community cleared the track, was funded by the Provincial Government of the Northern Cape. High-level science and engineering underpin the Square Kilometre Array Radio Telescope (SKA). Unimaginable amounts of data are set to be collected in this transformative radio telescope project that is centred on Carnarvon but has global reach. The data that the SKA will collect in a day would take twomillion years to play back on an iPod. The radio telescope’s image-resolution quality will exceed that of the Hubble Space Telescope by a factor of 50. The SKA will be the world’s largest radio telescope, made up of thousands of antennae