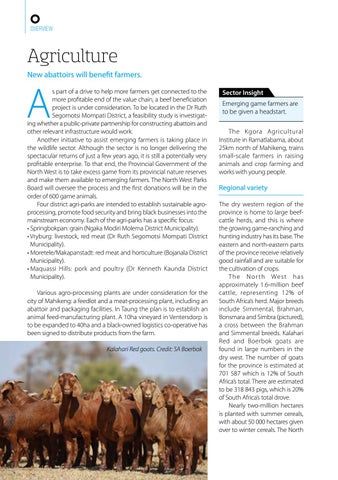 s part of a drive to help more farmers get connected to the more profitable end of the value chain, a beef beneficiation project is under consideration. To be located in the Dr Ruth Segomotsi Mompati District, a feasibility study is investigating whether a public-private partnership for constructing abattoirs and other relevant infrastructure would work. Another initiative to assist emerging farmers is taking place in the wildlife sector. Although the sector is no longer delivering the spectacular returns of just a few years ago, it is still a potentially very profitable enterprise. To that end, the Provincial Government of the North West is to take excess game from its provincial nature reserves and make them available to emerging farmers. The North West Parks Board will oversee the process and the first donations will be in the order of 600 game animals. Four district agri-parks are intended to establish sustainable agroprocessing, promote food security and bring black businesses into the mainstream economy. Each of the agri-parks has a specific focus: • Springbokpan: grain (Ngaka Modiri Molema District Municipality). • Vryburg: livestock, red meat (Dr Ruth Segomotsi Mompati District Municipality). • Moretele/Makapanstadt: red meat and horticulture (Bojanala District Municipality). • M aquassi Hills: pork and poultry (Dr Kenneth Kaunda District Municipality). Various agro-processing plants are under consideration for the city of Mahikeng: a feedlot and a meat-processing plant, including an abattoir and packaging facilities. In Taung the plan is to establish an animal feed-manufacturing plant. A 10ha vineyard in Ventersdorp is to be expanded to 40ha and a black-owned logistics co-operative has been signed to distribute products from the farm. Kalahari Red goats. Credit: SA Boerbok

Sector Insight Emerging game farmers are to be given a headstart. The Kgora Agricultural Institute in Ramatlabama, about 25km north of Mahikeng, trains small-scale farmers in raising animals and crop farming and works with young people.

Regional variety The dry western region of the province is home to large beefcattle herds, and this is where the growing game-ranching and hunting industry has its base. The eastern and north-eastern parts of the province receive relatively good rainfall and are suitable for the cultivation of crops. T h e N o r t h We s t h a s approximately 1.6-million beef cattle, representing 12% of South Africa’s herd. Major breeds include Simmental, Brahman, Bonsmara and Simbra (pictured), a cross between the Brahman and Simmental breeds. Kalahari Red and Boerbok goats are found in large numbers in the dry west. The number of goats for the province is estimated at 701 587 which is 12% of South Africa’s total. There are estimated to be 318 843 pigs, which is 20% of South Africa’s total drove. Nearly two-million hectares is planted with summer cereals, with about 50 000 hectares given over to winter cereals. The North