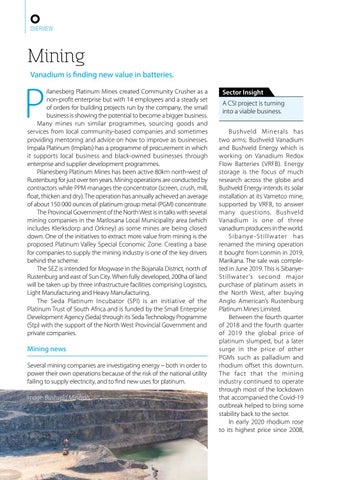 ilanesberg Platinum Mines created Community Crusher as a non-profit enterprise but with 14 employees and a steady set of orders for building projects run by the company, the small business is showing the potential to become a bigger business. Many mines run similar programmes, sourcing goods and services from local community-based companies and sometimes providing mentoring and advice on how to improve as businesses. Impala Platinum (Implats) has a programme of procurement in which it supports local business and black-owned businesses through enterprise and supplier development programmes. Pilanesberg Platinum Mines has been active 80km north-west of Rustenburg for just over ten years. Mining operations are conducted by contractors while PPM manages the concentrator (screen, crush, mill, float, thicken and dry). The operation has annually achieved an average of about 150 000 ounces of platinum group metal (PGM) concentrate. The Provincial Government of the North West is in talks with several mining companies in the Matlosana Local Municipality area (which includes Klerksdorp and Orkney) as some mines are being closed down. One of the initiatives to extract more value from mining is the proposed Platinum Valley Special Economic Zone. Creating a base for companies to supply the mining industry is one of the key drivers behind the scheme. The SEZ is intended for Mogwase in the Bojanala District, north of Rustenburg and east of Sun City. When fully developed, 200ha of land will be taken up by three infrastructure facilities comprising Logistics, Light Manufacturing and Heavy Manufacturing. The Seda Platinum Incubator (SPI) is an initiative of the Platinum Trust of South Africa and is funded by the Small Enterprise Development Agency (Seda) through its Seda Technology Programme (Stp) with the support of the North West Provincial Government and private companies.

Mining news Several mining companies are investigating energy – both in order to power their own operations because of the risk of the national utility failing to supply electricity, and to find new uses for platinum. Image: Bushveld Minerals

Sector Insight A CSI project is turning into a viable business. Bushveld Minerals has two arms; Bushveld Vanadium and Bushveld Energy which is working on Vanadium Redox Flow Batteries (VRFB). Energy storage is the focus of much research across the globe and Bushveld Energy intends its solar installation at its Vametco mine, supported by VRFB, to answer many questions. Bushveld Vanadium is one of three vanadium producers in the world. Sibanye -Stillwater has renamed the mining operation it bought from Lonmin in 2019, Marikana. The sale was completed in June 2019. This is SibanyeStillwater ’s second major purchase of platinum assets in the North West, after buying Anglo American’s Rustenburg Platinum Mines Limited. Between the fourth quarter of 2018 and the fourth quarter of 2019 the global price of platinum slumped, but a later surge in the price of other PGMs such as palladium and rhodium offset this downturn. The fact that the mining industry continued to operate through most of the lockdown that accompanied the Covid-19 outbreak helped to bring some stability back to the sector. In early 2020 rhodium rose to its highest price since 2008,