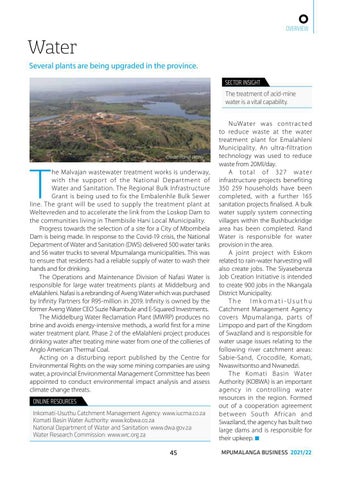 Water Several plants are being upgraded in the province. SECTOR INSIGHT The treatment of acid-mine water is a vital capability.

he Malvajan wastewater treatment works is underway, with the suppor t of the National Depar tment of Water and Sanitation. The Regional Bulk Infrastructure Grant is being used to fix the Embalenhle Bulk Sewer line. The grant will be used to supply the treatment plant at Weltevreden and to accelerate the link from the Loskop Dam to the communities living in Thembisile Hani Local Municipality. Progress towards the selection of a site for a City of Mbombela Dam is being made. In response to the Covid-19 crisis, the National Department of Water and Sanitation (DWS) delivered 500 water tanks and 56 water trucks to several Mpumalanga municipalities. This was to ensure that residents had a reliable supply of water to wash their hands and for drinking. The Operations and Maintenance Division of Nafasi Water is responsible for large water treatments plants at Middelburg and eMalahleni. Nafasi is a rebranding of Aveng Water which was purchased by Infinity Partners for R95-million in 2019. Infinity is owned by the former Aveng Water CEO Suzie Nkambule and E-Squared Investments. The Middelburg Water Reclamation Plant (MWRP) produces no brine and avoids energy-intensive methods, a world first for a mine water treatment plant. Phase 2 of the eMalahleni project produces drinking water after treating mine water from one of the collieries of Anglo American Thermal Coal. Acting on a disturbing report published by the Centre for Environmental Rights on the way some mining companies are using water, a provincial Environmental Management Committee has been appointed to conduct environmental impact analysis and assess climate change threats.

NuWater was contrac ted to reduce waste at the water treatment plant for Emalahleni Municipality. An ultra-filtration technology was used to reduce waste from 20Ml/day. A t o t a l o f 327 w a t e r infrastructure projects benefiting 350 259 households have been completed, with a further 165 sanitation projects finalised. A bulk water supply system connecting villages within the Bushbuckridge area has been completed. Rand Water is responsible for water provision in the area. A joint project with Eskom related to rain-water harvesting will also create jobs. The Siyasebenza Job Creation Initiative is intended to create 900 jobs in the Nkangala District Municipality. The Imkomati-Usuthu Catchment Management Agency covers Mpumalanga, parts of Limpopo and part of the Kingdom of Swaziland and is responsible for water usage issues relating to the following river catchment areas: Sabie-Sand, Crocodile, Komati, Nwaswitsontso and Nwanedzi. T he Komati Basin Water Authority (KOBWA) is an important agenc y in controlling water resources in the region. Formed out of a cooperation agreement bet ween South African and Swaziland, the agency has built two large dams and is responsible for their upkeep. ■ MPUMALANGA BUSINESS 2021/22