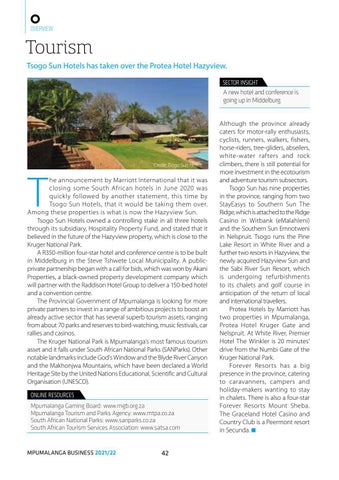 Tourism Tsogo Sun Hotels has taken over the Protea Hotel Hazyview. SECTOR INSIGHT A new hotel and conference is going up in Middelburg.

he announcement by Marriott International that it was closing some South African hotels in June 2020 was quickly followed by another statement, this time by Tsogo Sun Hotels, that it would be taking them over. Among these properties is what is now the Hazyview Sun. Tsogo Sun Hotels owned a controlling stake in all three hotels through its subsidiary, Hospitality Property Fund, and stated that it believed in the future of the Hazyview property, which is close to the Kruger National Park. A R350-million four-star hotel and conference centre is to be built in Middelburg in the Steve Tshwete Local Municipality. A publicprivate partnership began with a call for bids, which was won by Akani Properties, a black-owned property development company which will partner with the Raddison Hotel Group to deliver a 150-bed hotel and a convention centre. The Provincial Government of Mpumalanga is looking for more private partners to invest in a range of ambitious projects to boost an already active sector that has several superb tourism assets, ranging from about 70 parks and reserves to bird-watching, music festivals, car rallies and casinos. The Kruger National Park is Mpumalanga’s most famous tourism asset and it falls under South African National Parks (SANParks). Other notable landmarks include God’s Window and the Blyde River Canyon and the Makhonjwa Mountains, which have been declared a World Heritage Site by the United Nations Educational‚ Scientific and Cultural Organisation (UNESCO).

Although the province already caters for motor-rally enthusiasts, cyclists, runners, walkers, fishers, horse-riders, tree-gliders, abseilers, white-water rafters and rock climbers, there is still potential for more investment in the ecotourism and adventure tourism subsectors. Tsogo Sun has nine properties in the province, ranging from two StayEasys to Southern Sun The Ridge, which is attached to the Ridge Casino in Witbank (eMalahleni) and the Southern Sun Emnotweni in Nelspruit. Tsogo runs the Pine Lake Resort in White River and a further two resorts in Hazyview, the newly acquired Hazyview Sun and the Sabi River Sun Resort, which is undergoing refurbishments to its chalets and golf course in anticipation of the return of local and international travellers. Protea Hotels by Marriott has two properties in Mpumalanga, Protea Hotel Kruger Gate and Nelspruit. At White River, Premier Hotel The Winkler is 20 minutes’ drive from the Numbi Gate of the Kruger National Park. Forever Resorts has a big presence in the province, catering to caravanners, campers and holiday-makers wanting to stay in chalets. There is also a four-star Forever Resorts Mount Sheba. The Graceland Hotel Casino and Country Club is a Peermont resort in Secunda. ■