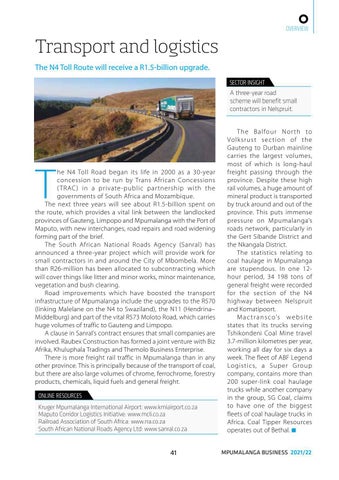 he N4 Toll Road began its life in 2000 as a 30-year concession to be run by Trans African Concessions ( TRAC ) in a private -public par tnership with the governments of South Africa and Mozambique. The next three years will see about R1.5-billion spent on the route, which provides a vital link between the landlocked provinces of Gauteng, Limpopo and Mpumalanga with the Port of Maputo, with new interchanges, road repairs and road widening forming part of the brief. The South African National Roads Agency (Sanral) has announced a three-year project which will provide work for small contractors in and around the City of Mbombela. More than R26-million has been allocated to subcontracting which will cover things like litter and minor works, minor maintenance, vegetation and bush clearing. Road improvements which have boosted the transport infrastructure of Mpumalanga include the upgrades to the R570 (linking Malelane on the N4 to Swaziland), the N11 (Hendrina– Middelburg) and part of the vital R573 Moloto Road, which carries huge volumes of traffic to Gauteng and Limpopo. A clause in Sanral’s contract ensures that small companies are involved. Raubex Construction has formed a joint venture with Biz Afrika, Khuluphala Tradings and Themolo Business Enterprise. There is more freight rail traffic in Mpumalanga than in any other province. This is principally because of the transport of coal, but there are also large volumes of chrome, ferrochrome, forestry products, chemicals, liquid fuels and general freight.

Th e B a l fo u r N o r t h to Volksr u st sec t ion of t he Gauteng to Durban mainline carries the largest volumes, most of which is long-haul freight passing through the province. Despite these high rail volumes, a huge amount of mineral product is transported by truck around and out of the province. This puts immense pressure on Mpumalanga’s roads network, particularly in the Gert Sibande District and the Nkangala District. The statistics relating to coal haulage in Mpumalanga are stupendous. In one 12hour period, 34 198 tons of general freight were recorded for the section of the N4 highway between Nelspruit and Komatipoort. M a c t r a n s c o’s w e b s i t e states that its trucks serving Tshikondeni Coal Mine travel 3.7-million kilometres per year, working all day for six days a week. The fleet of ABF Legend Logistics, a Super Group company, contains more than 200 super-link coal haulage trucks while another company in the group, SG Coal, claims to have one of the biggest fleets of coal haulage trucks in Africa. Coal Tipper Resources operates out of Bethal. ■ MPUMALANGA BUSINESS 2021/22