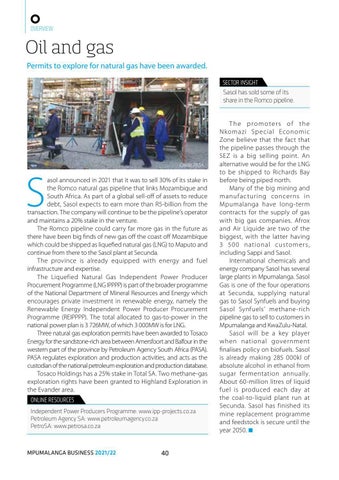 Oil and gas Permits to explore for natural gas have been awarded. SECTOR INSIGHT Sasol has sold some of its share in the Romco pipeline.

asol announced in 2021 that it was to sell 30% of its stake in the Romco natural gas pipeline that links Mozambique and South Africa. As part of a global sell-off of assets to reduce debt, Sasol expects to earn more than R5-billion from the transaction. The company will continue to be the pipeline’s operator and maintains a 20% stake in the venture. The Romco pipeline could carry far more gas in the future as there have been big finds of new gas off the coast off Mozambique which could be shipped as liquefied natural gas (LNG) to Maputo and continue from there to the Sasol plant at Secunda. The province is already equipped with energy and fuel infrastructure and expertise. The Liquefied Natural Gas Independent Power Producer Procurement Programme (LNG IPPPP) is part of the broader programme of the National Department of Mineral Resources and Energy which encourages private investment in renewable energy, namely the Renewable Energy Independent Power Producer Procurement Programme (REIPPPP). The total allocated to gas-to-power in the national power plan is 3 726MW, of which 3 000MW is for LNG. Three natural gas exploration permits have been awarded to Tosaco Energy for the sandstone-rich area between Amersfoort and Balfour in the western part of the province by Petroleum Agency South Africa (PASA). PASA regulates exploration and production activities, and acts as the custodian of the national petroleum exploration and production database. Tosaco Holdings has a 25% stake in Total SA. Two methane-gas exploration rights have been granted to Highland Exploration in the Evander area.

T h e p r o m o te r s o f t h e Nkomazi Sp e cial Economic Zone believe that the fact that the pipeline passes through the SEZ is a big selling point. An alternative would be for the LNG to be shipped to Richards Bay before being piped north. Many of the big mining and manufac turing concerns in Mpumalanga have long-term contracts for the supply of gas with big gas companies. Afrox and Air Liquide are two of the biggest, with the latter having 3 50 0 national cus tomers, including Sappi and Sasol. International chemicals and energy company Sasol has several large plants in Mpumalanga. Sasol Gas is one of the four operations at Secunda, supplying natural gas to Sasol Synfuels and buying Sasol Synfuels’ methane-rich pipeline gas to sell to customers in Mpumalanga and KwaZulu-Natal. Sasol will be a key player when national government finalises policy on biofuels. Sasol is already making 285 000kl of absolute alcohol in ethanol from sugar fermentation annually. About 60-million litres of liquid fuel is produced each day at the coal-to-liquid plant run at Secunda. Sasol has finished its mine replacement programme and feedstock is secure until the year 2050. ■