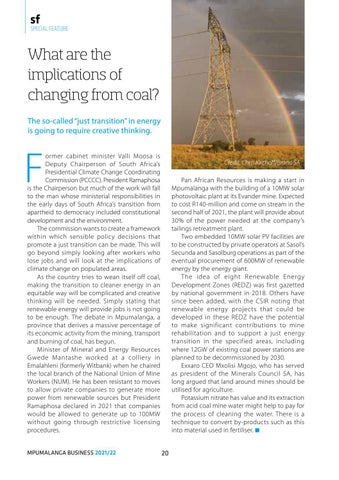 What are the implications of changing from coal? The so-called “just transition” in energy is going to require creative thinking.

ormer cabinet minister Valli Moosa is Deputy Chairperson of South Africa’s Presidential Climate Change Coordinating Commission (PCCCC). President Ramaphosa is the Chairperson but much of the work will fall to the man whose ministerial responsibilities in the early days of South Africa’s transition from apartheid to democracy included constitutional development and the environment. The commission wants to create a framework within which sensible policy decisions that promote a just transition can be made. This will go beyond simply looking after workers who lose jobs and will look at the implications of climate change on populated areas. As the country tries to wean itself off coal, making the transition to cleaner energy in an equitable way will be complicated and creative thinking will be needed. Simply stating that renewable energy will provide jobs is not going to be enough. The debate in Mpumalanga, a province that derives a massive percentage of its economic activity from the mining, transport and burning of coal, has begun. Minister of Mineral and Energy Resources Gwede Mantashe worked at a colliery in Emalahleni (formerly Witbank) when he chaired the local branch of the National Union of Mine Workers (NUM). He has been resistant to moves to allow private companies to generate more power from renewable sources but President Ramaphosa declared in 2021 that companies would be allowed to generate up to 100MW without going through restrictive licensing procedures.

Credit: Chris Kirchoff/Brand SA Pan African Resources is making a start in Mpumalanga with the building of a 10MW solar photovoltaic plant at its Evander mine. Expected to cost R140-million and come on stream in the second half of 2021, the plant will provide about 30% of the power needed at the company’s tailings retreatment plant. Two embedded 10MW solar PV facilities are to be constructed by private operators at Sasol’s Secunda and Sasolburg operations as part of the eventual procurement of 600MW of renewable energy by the energy giant. The idea of eight Renewable Energy Development Zones (REDZ) was first gazetted by national government in 2018. Others have since been added, with the CSIR noting that renewable energy projects that could be developed in these REDZ have the potential to make significant contributions to mine rehabilitation and to support a just energy transition in the specified areas, including where 12GW of existing coal power stations are planned to be decommissioned by 2030. Exxaro CEO Mxolisi Mgojo, who has served as president of the Minerals Council SA, has long argued that land around mines should be utilised for agriculture. Potassium nitrate has value and its extraction from acid coal mine water might help to pay for the process of cleaning the water. There is a technique to convert by-products such as this into material used in fertiliser. ■