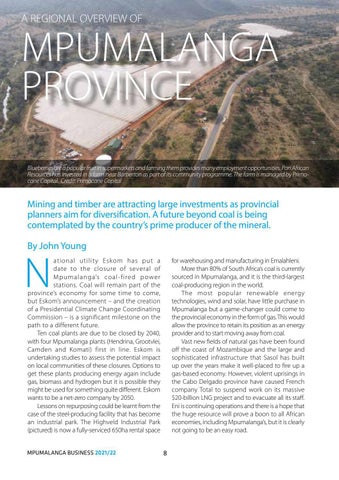 MPUMALANGA PROVINCE Blueberries are a popular fruit in supermarkets and farming them provides many employment opportunities. Pan African Resources has invested in a farm near Barberton as part of its community programme. The farm is managed by Primocane Capital. Credit: Primocane Capital

Mining and timber are attracting large investments as provincial planners aim for diversification. A future beyond coal is being contemplated by the country’s prime producer of the mineral. By John Young

for warehousing and manufacturing in Emalahleni. More than 80% of South Africa’s coal is currently sourced in Mpumalanga, and it is the third-largest coal-producing region in the world. The most popular renewable energy technologies, wind and solar, have little purchase in Mpumalanga but a game-changer could come to the provincial economy in the form of gas. This would allow the province to retain its position as an energy provider and to start moving away from coal. Vast new fields of natural gas have been found off the coast of Mozambique and the large and sophisticated infrastructure that Sasol has built up over the years make it well-placed to fire up a gas-based economy. However, violent uprisings in the Cabo Delgado province have caused French company Total to suspend work on its massive $20-billion LNG project and to evacuate all its staff. Eni is continuing operations and there is a hope that the huge resource will prove a boon to all African economies, including Mpumalanga’s, but it is clearly not going to be an easy road.

ational utilit y Esk om has put a date to the closure of several of M p um al an g a’s c oa l - f ired power stations. Coal will remain part of the province’s economy for some time to come, but Eskom’s announcement – and the creation of a Presidential Climate Change Coordinating Commission – is a significant milestone on the path to a different future. Ten coal plants are due to be closed by 2040, with four Mpumalanga plants (Hendrina, Grootvlei, Camden and Komati) first in line. Eskom is undertaking studies to assess the potential impact on local communities of these closures. Options to get these plants producing energy again include gas, biomass and hydrogen but it is possible they might be used for something quite different. Eskom wants to be a net-zero company by 2050. Lessons on repurposing could be learnt from the case of the steel-producing facility that has become an industrial park. The Highveld Industrial Park (pictured) is now a fully-serviced 650ha rental space