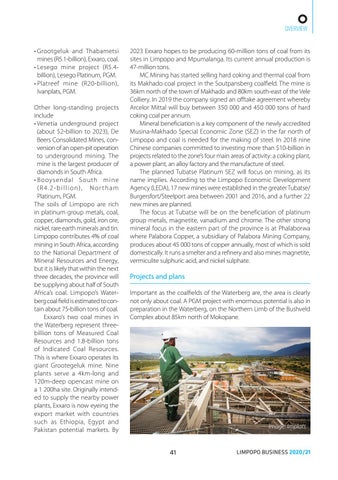 OVERVIEW • G rootgeluk and Thabametsi mines (R5.1-billion), Exxaro, coal. • Lesego mine project (R5.4billion), Lesego Platinum, PGM. • P latreef mine (R20-billion), Ivanplats, PGM. Other long-standing projects include • Venetia underground project (about $2-billion to 2023), De Beers Consolidated Mines, conversion of an open-pit operation to underground mining. The mine is the largest producer of diamonds in South Africa. • B ooysendal South mine (R4.2-billion), Northam Platinum, PGM. The soils of Limpopo are rich in platinum group metals, coal, copper, diamonds, gold, iron ore, nickel, rare earth minerals and tin. Limpopo contributes 4% of coal mining in South Africa, according to the National Department of Mineral Resources and Energy, but it is likely that within the next three decades, the province will be supplying about half of South Africa’s coal. Limpopo’s Waterberg coal field is estimated to contain about 75-billion tons of coal. Exxaro’s two coal mines in the Waterberg represent threebillion tons of Measured Coal Resources and 1.8-billion tons of Indicated Coal Resources. This is where Exxaro operates its giant Grootegeluk mine. Nine plants serve a 4km-long and 120m-deep opencast mine on a 1 200ha site. Originally intended to supply the nearby power plants, Exxaro is now eyeing the export market with countries such as Ethiopia, Egypt and Pakistan potential markets. By

2023 Exxaro hopes to be producing 60-million tons of coal from its sites in Limpopo and Mpumalanga. Its current annual production is 47-million tons. MC Mining has started selling hard coking and thermal coal from its Makhado coal project in the Soutpansberg coalfield. The mine is 36km north of the town of Makhado and 80km south-east of the Vele Colliery. In 2019 the company signed an offtake agreement whereby Arcelor Mittal will buy between 350 000 and 450 000 tons of hard coking coal per annum. Mineral beneficiation is a key component of the newly accredited Musina-Makhado Special Economic Zone (SEZ) in the far north of Limpopo and coal is needed for the making of steel. In 2018 nine Chinese companies committed to investing more than $10-billion in projects related to the zone’s four main areas of activity: a coking plant, a power plant, an alloy factory and the manufacture of steel. The planned Tubatse Platinum SEZ will focus on mining, as its name implies. According to the Limpopo Economic Development Agency (LEDA), 17 new mines were established in the greater Tubatse/ Burgersfort/Steelport area between 2001 and 2016, and a further 22 new mines are planned. The focus at Tubatse will be on the beneficiation of platinum group metals, magnetite, vanadium and chrome. The other strong mineral focus in the eastern part of the province is at Phalaborwa where Palabora Copper, a subsidiary of Palabora Mining Company, produces about 45 000 tons of copper annually, most of which is sold domestically. It runs a smelter and a refinery and also mines magnetite, vermiculite sulphuric acid, and nickel sulphate.

Projects and plans Important as the coalfields of the Waterberg are, the area is clearly not only about coal. A PGM project with enormous potential is also in preparation in the Waterberg, on the Northern Limb of the Bushveld Complex about 85km north of Mokopane.