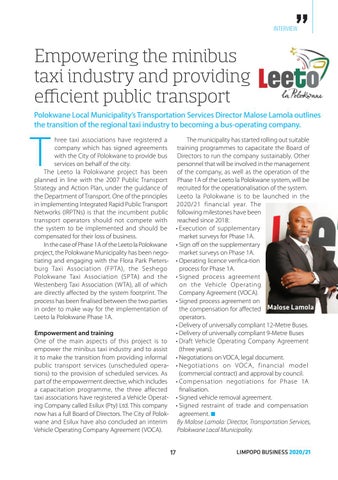 hree taxi associations have registered a company which has signed agreements with the City of Polokwane to provide bus services on behalf of the city. The Leeto la Polokwane project has been planned in line with the 2007 Public Transport Strategy and Action Plan, under the guidance of the Department of Transport. One of the principles in implementing Integrated Rapid Public Transport Networks (IRPTNs) is that the incumbent public transport operators should not compete with the system to be implemented and should be compensated for their loss of business. In the case of Phase 1A of the Leeto la Polokwane project, the Polokwane Municipality has been negotiating and engaging with the Flora Park Pietersburg Taxi Association (FPTA), the Seshego Polokwane Taxi Association (SPTA) and the Westenberg Taxi Association (WTA), all of which are directly affected by the system footprint. The process has been finalised between the two parties in order to make way for the implementation of Leeto la Polokwane Phase 1A.

The municipality has started rolling out suitable training programmes to capacitate the Board of Directors to run the company sustainably. Other personnel that will be involved in the management of the company, as well as the operation of the Phase 1A of the Leeto la Polokwane system, will be recruited for the operationalisation of the system. Leeto la Polokwane is to be launched in the 2020/21 financial year. The following milestones have been reached since 2018: • Execution of supplementary market surveys for Phase 1A. • Sign off on the supplementary market surveys on Phase 1A. • Operating licence verifica-tion process for Phase 1A. • S igned process agreement on the Vehicle Operating Company Agreement (VOCA). • Signed process agreement on the compensation for affected Malose Lamola operators. • Delivery of universally compliant 12-Metre Buses. • Delivery of universally compliant 9-Metre Buses • Draft Vehicle Operating Company Agreement (three years). • Negotiations on VOCA, legal document. • N egotiations on VOCA, financial model (commercial contract) and approval by council. • C ompensation negotiations for Phase 1A finalisation. • Signed vehicle removal agreement. • S igned restraint of trade and compensation agreement. ■ By Malose Lamola: Director, Transportation Services, Polokwane Local Municipality.

Empowerment and training One of the main aspects of this project is to empower the minibus taxi industry and to assist it to make the transition from providing informal public transport services (unscheduled operations) to the provision of scheduled services. As part of the empowerment directive, which includes a capacitation programme, the three affected taxi associations have registered a Vehicle Operating Company called Esilux (Pty) Ltd. This company now has a full Board of Directors. The City of Polokwane and Esilux have also concluded an interim Vehicle Operating Company Agreement (VOCA).