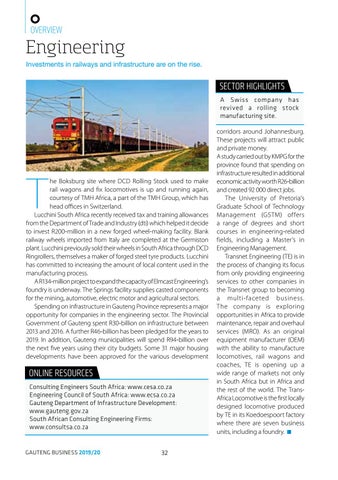 Engineering Investments in railways and infrastructure are on the rise.

he Boksburg site where DCD Rolling Stock used to make rail wagons and fix locomotives is up and running again, courtesy of TMH Africa, a part of the TMH Group, which has head offices in Switzerland. Lucchini South Africa recently received tax and training allowances from the Department of Trade and Industry (dti) which helped it decide to invest R200-million in a new forged wheel-making facility. Blank railway wheels imported from Italy are completed at the Germiston plant. Lucchini previously sold their wheels in South Africa through DCD Ringrollers, themselves a maker of forged steel tyre products. Lucchini has committed to increasing the amount of local content used in the manufacturing process. A R134-million project to expand the capacity of Elmcast Engineering’s foundry is underway. The Springs facility supplies casted components for the mining, automotive, electric motor and agricultural sectors. Spending on infrastructure in Gauteng Province represents a major opportunity for companies in the engineering sector. The Provincial Government of Gauteng spent R30-billion on infrastructure between 2013 and 2016. A further R46-billion has been pledged for the years to 2019. In addition, Gauteng municipalities will spend R94-billion over the next five years using their city budgets. Some 31 major housing developments have been approved for the various development

corridors around Johannesburg. These projects will attract public and private money. A study carried out by KMPG for the province found that spending on infrastructure resulted in additional economic activity worth R26-billion and created 92 000 direct jobs. The University of Pretoria’s Graduate School of Technology Management (GSTM) offers a range of degrees and short courses in engineering-related fields, including a Master’s in Engineering Management. Transnet Engineering (TE) is in the process of changing its focus from only providing engineering services to other companies in the Transnet group to becoming a multi-faceted business. The company is exploring opportunities in Africa to provide maintenance, repair and overhaul services (MRO). As an original equipment manufacturer (OEM) with the ability to manufacture locomotives, rail wagons and coaches, TE is opening up a wide range of markets not only in South Africa but in Africa and the rest of the world. The TransAfrica Locomotive is the first locally designed locomotive produced by TE in its Koedoespoort factory where there are seven business units, including a foundry.