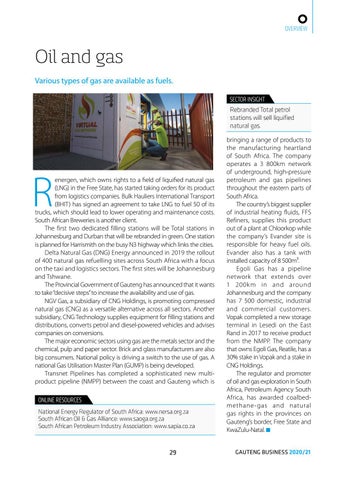 energen, which owns rights to a field of liquified natural gas (LNG) in the Free State, has started taking orders for its product from logistics companies. Bulk Hauliers International Transport (BHIT) has signed an agreement to take LNG to fuel 50 of its trucks, which should lead to lower operating and maintenance costs. South African Breweries is another client. The first two dedicated filling stations will be Total stations in Johannesburg and Durban that will be rebranded in green. One station is planned for Harrismith on the busy N3 highway which links the cities. Delta Natural Gas (DNG) Energy announced in 2019 the rollout of 400 natural gas refuelling sites across South Africa with a focus on the taxi and logistics sectors. The first sites will be Johannesburg and Tshwane. The Provincial Government of Gauteng has announced that it wants to take “decisive steps” to increase the availability and use of gas. NGV Gas, a subsidiary of CNG Holdings, is promoting compressed natural gas (CNG) as a versatile alternative across all sectors. Another subsidiary, CNG Technology supplies equipment for filling stations and distributions, converts petrol and diesel-powered vehicles and advises companies on conversions. The major economic sectors using gas are the metals sector and the chemical, pulp and paper sector. Brick and glass manufacturers are also big consumers. National policy is driving a switch to the use of gas. A national Gas Utilisation Master Plan (GUMP) is being developed. Transnet Pipelines has completed a sophisticated new multiproduct pipeline (NMPP) between the coast and Gauteng which is

bringing a range of products to the manufacturing heartland of South Africa. The company operates a 3 800km network of underground, high-pressure petroleum and gas pipelines throughout the eastern parts of South Africa. The country’s biggest supplier of industrial heating fluids, FFS Refiners, supplies this product out of a plant at Chloorkop while the company’s Evander site is responsible for heavy fuel oils. Evander also has a tank with installed capacity of 8 500m³. Egoli Gas has a pipeline network that extends over 1 200km in and around Johannesburg and the company has 7 500 domestic, industrial and commercial customers. Vopak completed a new storage terminal in Lesedi on the East Rand in 2017 to receive product from the NMPP. The company that owns Egoli Gas, Reatile, has a 30% stake in Vopak and a stake in CNG Holdings. The regulator and promoter of oil and gas exploration in South Africa, Petroleum Agency South Africa, has awarded coalbedmethane -gas and natural gas rights in the provinces on Gauteng’s border, Free State and KwaZulu-Natal. ■ GAUTENG BUSINESS 2020/21