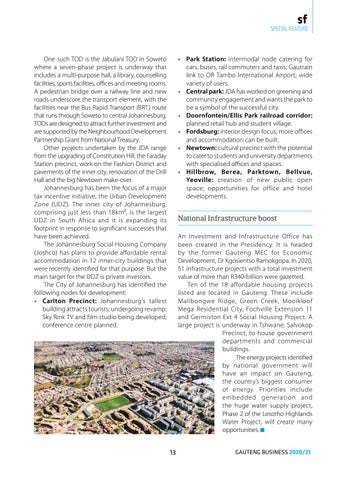 One such TOD is the Jabulani TOD in Soweto where a seven-phase project is underway that includes a multi-purpose hall, a library, counselling facilities, sports facilities, offices and meeting rooms. A pedestrian bridge over a railway line and new roads underscore the transport element, with the facilities near the Bus Rapid Transport (BRT) route that runs through Soweto to central Johannesburg. TODs are designed to attract further investment and are supported by the Neighbourhood Development Partnership Grant from National Treasury. Other projects undertaken by the JDA range from the upgrading of Constitution Hill, the Faraday Station precinct, work on the Fashion District and pavements of the inner city, renovation of the Drill Hall and the big Newtown make-over. Johannesburg has been the focus of a major tax incentive initiative, the Urban Development Zone (UDZ). The inner city of Johannesburg, comprising just less than 18km², is the largest UDZ in South Africa and it is expanding its footprint in response to significant successes that have been achieved. The Johannesburg Social Housing Company (Joshco) has plans to provide affordable rental accommodation in 12 inner-city buildings that were recently identified for that purpose. But the main target for the UDZ is private investors. The City of Johannesburg has identified the following nodes for development: • Carlton Precinct: Johannesburg’s tallest building attracts tourists; undergoing revamp; Sky Rink TV and film studio being developed; conference centre planned.

National Infrastructure boost An Investment and Infrastructure Office has been created in the Presidency. It is headed by the former Gauteng MEC for Economic Development, Dr Kgosientso Ramokgopa. In 2020, 51 infrastructure projects with a total investment value of more than R340-billion were gazetted. Ten of the 18 affordable housing projects listed are located in Gauteng. These include Malibongwe Ridge, Green Creek, Mooikloof Mega Residential City, Fochville Extension 11 and Germiston Ext 4 Social Housing Project. A large project is underway in Tshwane, Salvokop Precinct, to house government departments and commercial buildings. The energy projects identified by national government will have an impact on Gauteng, the country’s biggest consumer of energy. Priorities include embedded generation and the huge water supply project, Phase 2 of the Lesotho Highlands Water Project, will create many opportunities. ■