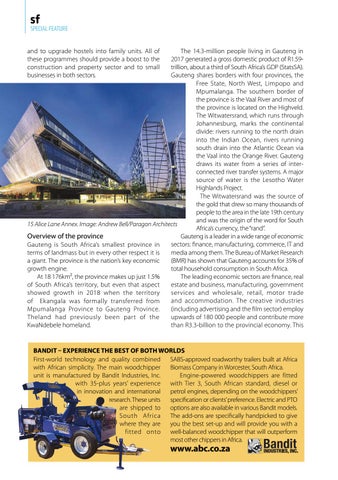 SPECIAL FEATURE The 14.3-million people living in Gauteng in 2017 generated a gross domestic product of R1.59trillion, about a third of South Africa’s GDP (StatsSA). Gauteng shares borders with four provinces, the Free State, North West, Limpopo and Mpumalanga. The southern border of the province is the Vaal River and most of the province is located on the Highveld. The Witwatersrand, which runs through Johannesburg, marks the continental divide: rivers running to the north drain into the Indian Ocean, rivers running south drain into the Atlantic Ocean via the Vaal into the Orange River. Gauteng draws its water from a series of interconnected river transfer systems. A major source of water is the Lesotho Water Highlands Project. The Witwatersrand was the source of the gold that drew so many thousands of people to the area in the late 19th century and was the origin of the word for South 15 Alice Lane Annex. Image: Andrew Bell/Paragon Architects Africa’s currency, the “rand”.   Gauteng is a leader in a wide range of economic Overview of the province sectors: finance, manufacturing, commerce, IT and Gauteng is South Africa’s smallest province in media among them. The Bureau of Market Research terms of landmass but in every other respect it is (BMR) has shown that Gauteng accounts for 35% of a giant. The province is the nation’s key economic total household consumption in South Africa. growth engine. The leading economic sectors are finance, real At 18 176km², the province makes up just 1.5% estate and business, manufacturing, government of South Africa’s territory, but even that aspect services and wholesale, retail, motor trade showed growth in 2018 when the territory and accommodation. The creative industries of Ekangala  was formally transferred from (including advertising and the film sector) employ Mpumalanga Province to Gauteng  Province. upwards of 180 000 people and contribute more Theland had previously been part of the  than R3.3-billion to the provincial economy. This KwaNdebele homeland. and to upgrade hostels into family units. All of these programmes should provide a boost to the construction and property sector and to small businesses in both sectors.

BANDIT – EXPERIENCE THE BEST OF BOTH WORLDS First-world technology and quality combined SABS-approved roadworthy trailers built at Africa with African simplicity. The main woodchipper Biomass Company in Worcester, South Africa. unit is manufactured by Bandit Industries, Inc. Engine-powered woodchippers are fitted with 35-plus years’ experience with Tier 3, South African standard, diesel or in innovation and international petrol engines, depending on the woodchippers’ research. These units specification or clients’ preference. Electric and PTO are shipped to options are also available in various Bandit models. South Africa The add-ons are specifically handpicked to give where they are you the best set-up and will provide you with a fitted onto well-balanced woodchipper that will outperform most other chippers in Africa.